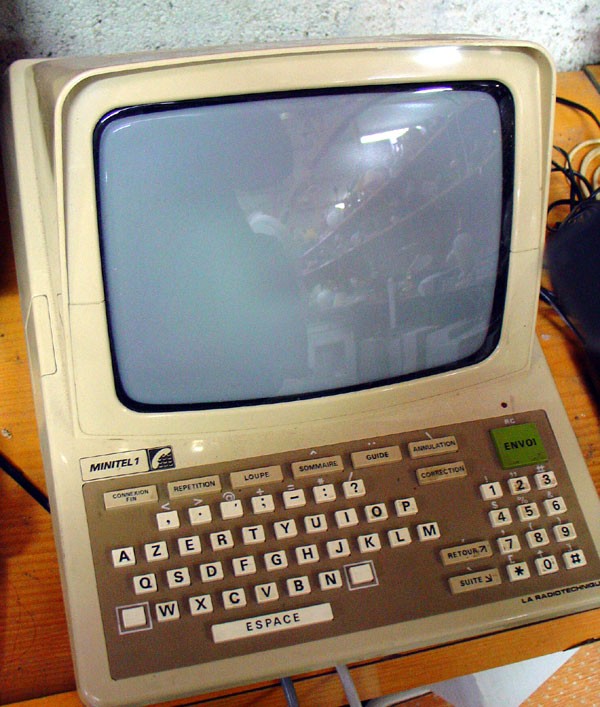 (image from Wikipedia article on Minitel)

This past weekend’s NY Times Magazine included an article titled ‘When Countries Think They Can Go D.I.Y.‘ that included some commentary on the Minitel service, once theorized to become the predominant ‘online’ exchange system, for everything from stocks to train tickets. The system was eventually turned offline, but only as recently as 2012.

This lead me down an even further rabbit hole, unearthing older NY Times articles on the Minitel service from as far back as 1996, 1991, and 1986, when the service had approximately 1.4 million terminals installed (and attempts were made to install terminals in the United States).

Here are quick snippets from each article and links to the NY Times archives for further reading.

1996 – Beyond Minitel: France on the Internet

Today, there are Minitel terminals in more than 6.5 million French homes and offices, but France never managed to capitalize on its lead in the technology or persuaded other countries to buy the system.

Worse, by concentrating all its efforts on the Minitel, the country lost ground in exploiting the Internet, with the result that the global system of interlinked networks is dominated by the English language.

This week, in an important change of policy,France Telecom, the state-owned telecommunications monopoly, will announce plans tobecome a mass-market Internet operator.

Linking up with a heartland telephone company, the French have found another foothold in the huge U.S. market for one of their government-sponsored high-technology successes.

Now the tough marketing job begins for France Télécom and US West Inc., which this week announced a $75 million joint project to spread a service similar to the Minitel, which provides a huge amount of information and services ranging from bus schedules to interactive banking through 5.6 million home and office terminals in France.

US West, which operates a similar service on a pilot basis in Omaha, Nebraska, brings to the new project 12 million potential subscribers in 14 states from the Midwest to the Pacific Northwest. It will take a 60 percent share of the venture, which was already under discussion with France Télécom when a federal appeals court this week freed local phone companies to go into the business of providing information services.

In a mere five years, the videotex craze has swept France. There are currently 1.4 million terminals in use in households and businesses throughout the country. Each unit is known as a ”Minitel” (which is also the popular name for the entire system) and consists of a keyboard, screen and modem, an instrument that translates telephone signals into computer-readable graphics. The P.T.T., which owns the terminals and issues them free of charge to selected home customers and for an 85-franc monthly fee to business customers, plans to distribute another million Minitels by the end of this year.

But Minitel is far more than a consumer toy or a way to meet new lovers. For the French Government and industry, the sophisticated videotex network is a profitable enterprise with virtually unlimited growth potential. In 1985, Minitel earned 620 million francs (approximately $70 million) for the P.T.T. from additional telephone usage, cost savings and terminal leasing, according to Georges Nahon, managing director of Intelmatique, the P.T.T. agency that markets the system abroad.