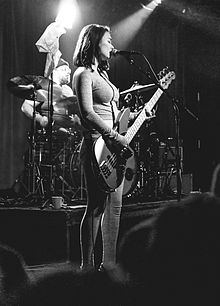 Today we celebrate musical artist Mitski Miyawaki. Mitski, who is half Japanese and half American, incorporates her struggles with fitting in and identity with her work. Speaking to Nylon in 2016:

This morning, Mitski officially released the music video for her single, “Your Best American Girl.” In what she calls a “dramatic song” off her forthcoming sophomore album Puberty 2, Mitski reflects on her mixed identity as a half-Japanese and half-American woman—something that’s still an ongoing conversation for her.

“I still haven’t found it, with a capital I,” she explains. “In the U.S., I don’t quite feel American and I don’t quite feel white enough. But then, to fellow Asian people or in Japan, I’m also a foreigner. I’m mixed, I’m half white, I’m not Asian enough, I don’t understand… I’m stuck in this kind of middle ground of not being allowed in either camp. I also didn’t grow up in the U.S. and I also didn’t really grow up in Japan. I grew up moving around because of my father’s occupation, so I truly, fundamentally don’t belong anywhere. That’s always difficult when it comes to relating to other people or being part of a community or being in a relationship because you need some sort of point of reference; you need kind of a basis or a foundation where you can relate to each other.”

Comments Off on Mitski #AsianPacificAmericanHeritageMonth