Today we celebrate Dr. Chien-Shiung Wu whose expertise in experimental physics earned her the recognition as the “First Lady of Physics”. After completing her PhD at U.C. Berkeley Dr. Wu taught at Princeton and Smith College and eventually went on to work on the Manhattan Project at Columbia where she remained for the rest of her career. 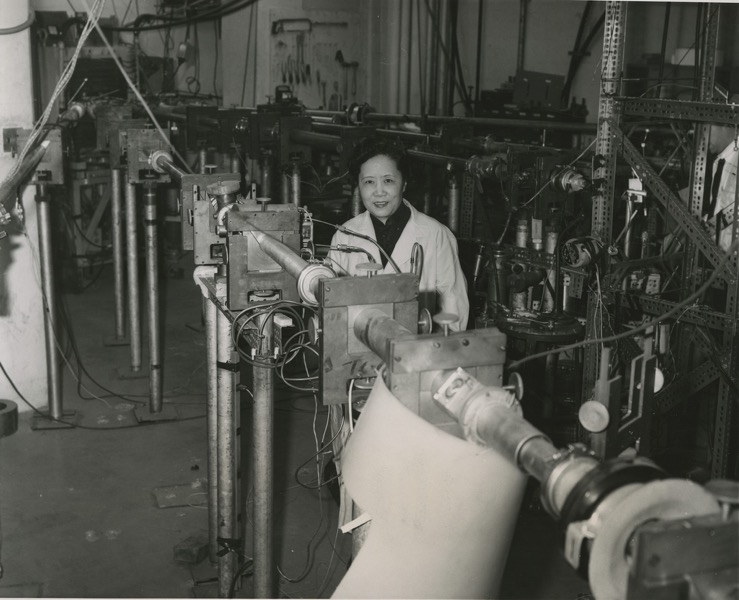 By this point in her career, Wu had earned a solid reputation as a highly skilled experimental physicist. With the war behind her, she needed a new problem to focus on. Wu chose wisely: Her investigations of beta decay — a mysterious type of radioactivity in which a large atomic nucleus emits energy and morphs into a new element — would help her reshape the world’s understanding of several fundamental atomic processes.

At the time, no one really understood how beta decay worked. Back in 1933, Enrico Fermi had devised what seemed like a viable theory for how an atom’s nucleus, composed of protons and neutrons, could shoot off an electron along with a neutrino and change into a completely different element in the process. But a number of physicists had tried to support Fermi’s theory with experimental data, and their results were muddled at best.

If there was one thing for which Chien-Shiung Wu was known, it was going the extra mile to design experiments in a way that unequivocally elucidated the mechanisms of a system. “She had a very, very strong sense that things had to be done right,” Wu’s former graduate student, Leon Lidofsky, told author Sharon McGrayne. “If it was done sloppily, it wasn’t worth doing because the results weren’t reliable.”

Wu was really a master engineer as much as she was a physicist. And, much like Star Trek’s Lieutenant Commander Montgomery “Scotty” Scott, she was considered a “miracle worker”. In the case of beta decay, by carefully deconstructing what other physicists had done in their experiments, she noted a critical fact: The radiation sources they had worked with were of different thicknesses. This turned out to be the key problem with previous tests of Fermi’s decade-old theory. As soon as Wu controlled for the source thickness, her and others’ results beautifully matched Fermi’s predictions, proving him right once and for all.