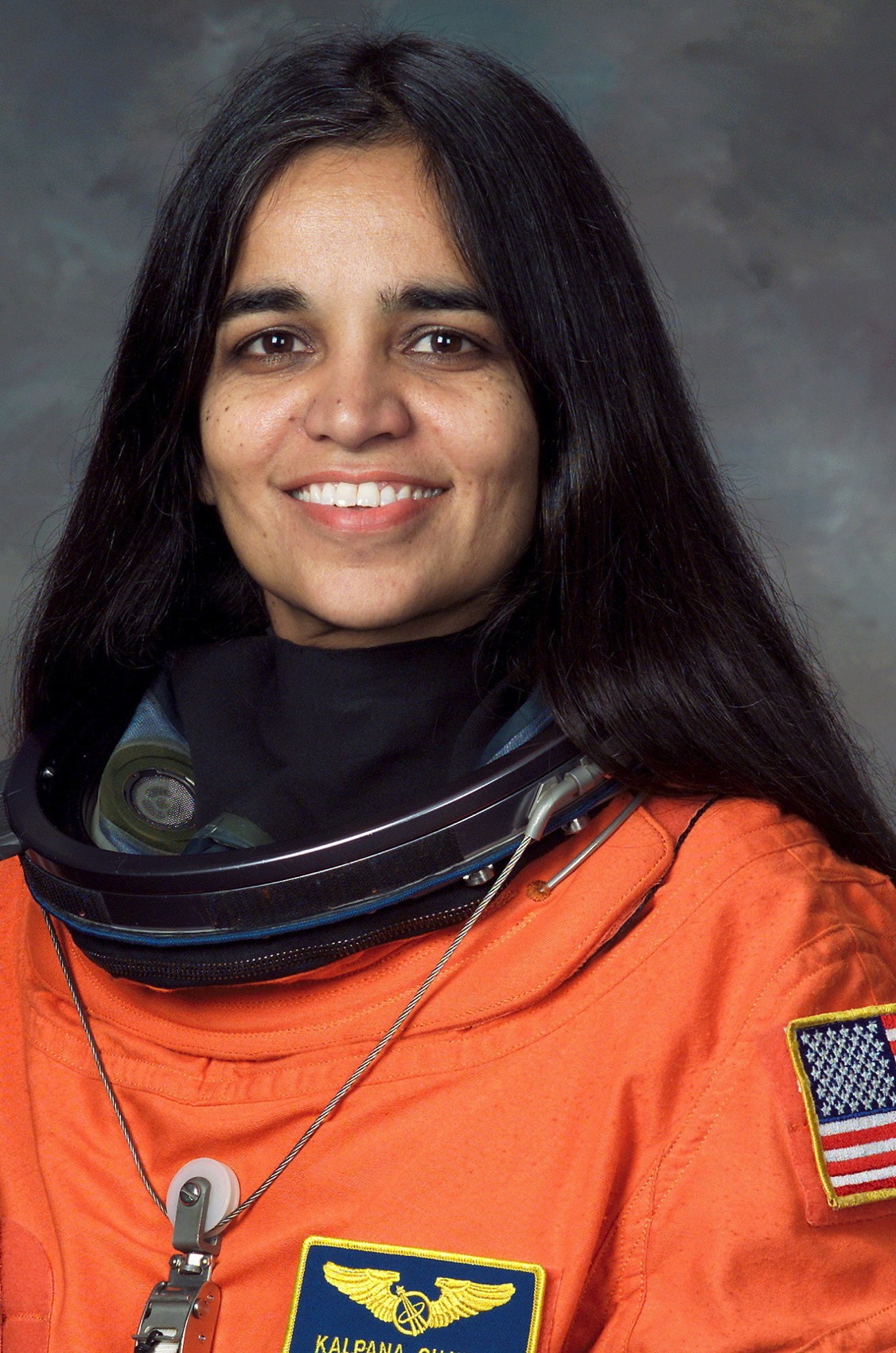 Kalpana Chawla was the first woman of Indian origin in space, Via Wikipedia

Kalpana Chawla (March 17, 1962 – February 1, 2003) was an Indian American astronaut and the first woman of Indian origin in space. She first flew on Space Shuttle Columbia in 1997 as a mission specialist and primary robotic arm operator. In 2003, Chawla was one of the seven crew members who died in the Space Shuttle Columbia disaster [6] when the craft disintegrated during its re-entry into the Earth’s atmosphere. Chawla is a recipient of the Congressional Space Medal of Honor.

Kalpana Chawla was born on March 17, 1962. Her official date of birth was altered to 1 July 1961 to allow her to join school underage. While other girls of her age played with dolls, Kalpana liked to draw pictures of airplanes. She was not always the top student in her class but had a very inquisitive mind. After getting a Bachelor of Science degree in Aeronautical Engineering from Punjab Engineering College, Chandigarh, she moved to the United States in 1982 where she obtained the Master of Science degree in Aerospace Engineering from the University of Texas at Arlington in 1984. Determined to become an astronaut even in the face of the Challenger disaster, Chawla went on to earn a second Masters in 1986 and a PhD[10] in aerospace engineering in 1988 from the University of Colorado at Boulder.

Career
In 1988, she began working at NASA, where she did Computational fluid dynamics (CFD) research on Vertical/Short Takeoff and Landing concepts. In 1993, she joined Overset Methods, Inc. as Vice President and Research Scientist specializing in simulation of moving multiple body problems. Chawla held a Certificated Flight Instructor rating for airplanes, gliders and Commercial Pilot licenses for single and multi-engine airplanes, seaplanes and gliders. Becoming a naturalized U.S. citizen in April 1991, Chawla applied for the NASA Astronaut Corps. She joined the Corps in March 1995 and was selected for her first flight in 1996. She spoke the following words while traveling in the weightlessness of space, “You are just your intelligence”. She traveled 10.67 million km, as many as 252 times around the Earth.

First space mission
Her first space mission began on November 19, 1997, as part of the six-astronaut crew that flew the Space Shuttle Columbia flight STS-87. Chawla was the first Indian-born woman and the second Indian person to fly in space, following cosmonaut Rakesh Sharma who flew in 1984 on the Soyuz T-11. On her first mission, Chawla traveled over 10.4 million miles in 252 orbits of the earth, logging more than 372 hours in space.[11] During STS-87, she was responsible for deploying the Spartan satellite which malfunctioned, necessitating a spacewalk by Winston Scott and Takao Doi to capture the satellite. A five-month NASA investigation fully exonerated Chawla by identifying errors in software interfaces and the defined procedures of flight crew and ground control. After the completion of STS-87 post-flight activities, Chawla was assigned to technical positions in the astronaut office to work on the space station. 123

Second space mission
In 2000, Chawla was selected for her second flight as part of the crew of STS-107. This mission was repeatedly delayed due to scheduling conflicts and technical problems such as the July 2002 discovery of cracks in the shuttle engine flow liners. On January 16, 2003, Chawla finally returned to space aboard Space Shuttle Columbia on the ill-fated STS-107 mission.included the microgravity experiments, for which the crew conducted nearly 80 experiments studying earth and space science, advanced technology development, and astronaut health and safety. During the launch of STS-107, Columbia’s 28th mission, a piece of foam insulation broke off from the Space Shuttle external tank and struck the left wing of the orbiter. A few previous shuttle launches had seen minor damage from foam shedding,[13] but some engineers suspected that the damage to Columbia was more serious. NASA managers limited the investigation, reasoning that the crew could not have fixed the problem if it had been confirmed. When Columbia re-entered the atmosphere of Earth, the damage allowed hot atmospheric gases to penetrate and destroy the internal wing structure, which caused the spacecraft to become unstable and slowly break apart. After the disaster, Space Shuttle flight operations were suspended for more than two years, similar to the aftermath of the Challenger disaster. Construction of the International Space Station (ISS) was put on hold; the station relied entirely on the Russian Roscosmos State Corporation for resupply for 29 months until Shuttle flights resumed with STS-114 and 41 months for crew rotation.

Chawla died in the Space Shuttle Columbia disaster which occurred on February 1, 2003 when the Columbia disintegrated over Texas during re-entry into the Earth’s atmosphere, with the death of all of seven crew members, shortly before it was scheduled to conclude its 28th mission, STS-107.

Chawla’s remains were identified along with the rest of the crew members and returned to her family in India for cremation in a traditional Hindu ceremony.

Comments Off on Kalpana Chawla #AsianPacificAmericanHeritageMonth