45 Years Ago, NASA Launched An Infographic For Aliens Into Space

The Pioneer Plaque was conceived to be a galactic greeting card to explain life on earth to extra terrestrial life forms. The gold-anodized aluminum Pioneer plaque was launched in 1972 and 1973 aboard NASA’s twin spacecraft, Pioneer 10 and 11, Via Wikipedia

The Pioneer plaques are a pair of gold-anodized aluminium plaques which were placed on board the 1972 Pioneer 10 and 1973 Pioneer 11 spacecraft, featuring a pictorial message, in case either Pioneer 10 or 11 is intercepted by extraterrestrial life. The plaques show the nude figures of a human male and female along with several symbols that are designed to provide information about the origin of the spacecraft.

The Pioneer 10 and 11 spacecraft were the first human-built objects to achieve escape velocity from the Solar System. The plaques were attached to the spacecraft’s antenna support struts in a position that would shield them from erosion by interstellar dust.

The original idea, that the Pioneer spacecraft should carry a message from mankind, was first mentioned by Eric Burgess[2] when he visited the Jet Propulsion Laboratory in Pasadena, California, during the Mariner 9 mission. He approached Carl Sagan, who had lectured about communication with extraterrestrial intelligences at a conference in Crimea.

Sagan was enthusiastic about the idea of sending a message with the Pioneer spacecraft. NASA agreed to the plan and gave him three weeks to prepare a message. Together with Frank Drake he designed the plaque, and the artwork was prepared by Sagan’s then wife Linda Salzman Sagan.

Both plaques were manufactured at Precision Engravers, San Carlos, California.

At the top left of the plate is a schematic representation of the hyperfine transition of hydrogen, which is the most abundant element in the universe. The spin-flip transition of a hydrogen atom’s electron has a frequency of about 1420.405 MHz, which corresponds to a period of 0.704 ns. Light at this frequency has a vacuum wavelength of 21.106 cm (which is also the distance the light travels in that time period). Below the symbol, the small vertical line—representing the binary digit 1—specifies a unit of length (21 cm) as well as a unit of time (0.7 ns). Both units are used as measurements in the other symbols.

On the right side of the plaque, a man and a woman are shown in front of the spacecraft. Between the brackets that indicate the height of the woman, the binary representation of the number 8 can be seen (1000, with a small defect in the first zero). In units of the wavelength of the hyperfine transition of hydrogen this means 8 × 21 cm = 168 cm.

The right hand of the man is raised as a sign of good will. Although this gesture may not be understood, it offers a way to show the opposable thumb and how the limbs can be moved.

Originally Sagan intended the humans to be shown holding hands, but soon realized that an extraterrestrial might perceive them as a single creature rather than two organisms.

The original drawings of the figures were based on drawings by Leonardo da Vinci and Greek sculptures. 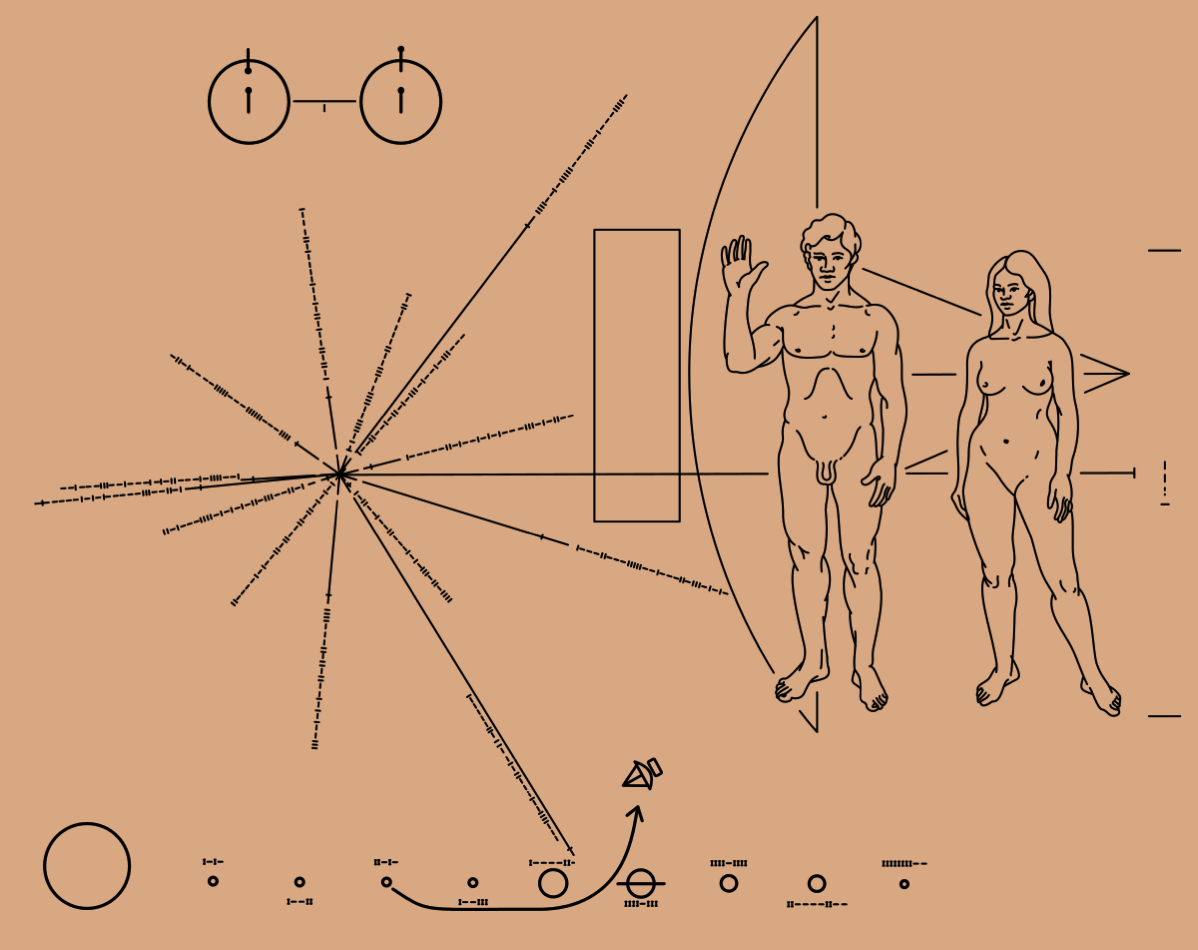 Comments Off on 45 Years Ago, NASA Launched An Infographic For Aliens Into Space