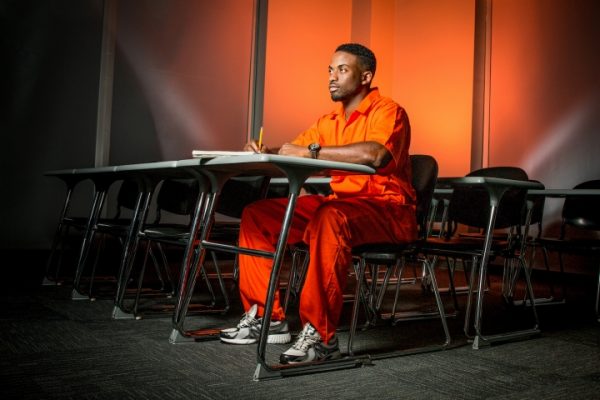 For 10 months in 2013–14, the artist Sherrill Roland was incarcerated at Washington, DC’s notorious Central Detention Facility after being convicted of a crime he did not commit. He was eventually released and exonerated, but the experience changed him profoundly. Ever since, he’s devoted much of his artistic practice to facilitating more open conversations about the US criminal justice system.3

Roland began donning a neon orange jumpsuit, similar to the one he wore in jail, in public places while completing his master’s degree at the University of North Carolina at Greensboro. That marked the beginning of The Jumpsuit Project, an ongoing social practice piece he’s brought to museums, libraries, and college campuses, where he engages strangers in conversations about their experiences with incarceration, the prison system, and the impact of both on communities. This week, he’ll be at the central branch of the Brooklyn Public Library for three days.

“A lot of people come up and say, ‘My brother is going through the same thing,’ or someone else in their lives,” Roland recently told the Huffington Post. “I met people who had so much to share. It opened up a whole other support system. People were willing to share so much, in fact they needed to share it, they just didn’t think they’d have an opportunity to … talk to someone that got it.”