Confronting Our Existential Dilemmas in a Live-Simulated Fantasy World #ArtTuesday 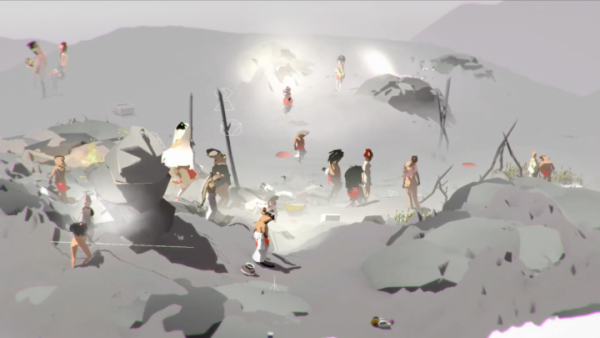 What empathetic connections can be found in virtual reality, as a new realm to exercise the imagination? This was the primary question I found posed when viewing Ian Cheng’s entrancing solo exhibition Emissaries at MoMA Ps1.

For this exhibition, Cheng designed three live simulations, or self-playing video games, that take place on a fictitious volcanic island. There are three “chapters,” each a different era in the island’s history, that each occupy a different screen in the galleries. The nature of live simulation means that the characters who populate the island control themselves in real time, as opposed to a prerecording that would play on loop. Chapter 1, “Emissary in the Squat of Gods,” represents humanity’s prehistoric past and features cartoonish figures tinkering around in a barren white landscape inspired by volcanos in Southeast Asia, where ash provides fertile soil for new life to spawn. When I viewed the work, a few characters were huddled so tightly around a fire that some were actually standing inside of it. In this new world, the fire didn’t seem to burn. In Chapter 2 “Emissary Forks at Perfection,” Shiba Inu dogs dominate the island, which is now lush with tropical greenery, occasionally uprooting a shrub or doing what can only be described as derping.