Created by Yuri Suzuki Design Studio in collaboration with QOSMO and presented at the recent Milan Design Week inside a historical former seminary, Sonic Pendulum is a sound installation in which articial intelligence imagines and materialises an endless soundscape.

Whilst continuously generating a calming ambient-sound and bass-line atmosphere; the algorithm conducts the voice of Miyu Hosoi and processes disturbances around the space, generated by the crowd themselves. The result is in an ever-evolving piece – each moment singular, never to be repeated exactly again – in conversation with its visitors and the way in which they move around the space.

The original concept was created in response to the inspiration behind the new AUDI A5 line. The structure is made up of 30 pendulums which – while gently modulating the sound coming from speakers through doppler effect – are also a visual representation of a dream: a systematised mess, with moments of order emerging from the chaos.

The team trained the AI to create an infinite composition, which is site and moment-to-moment specific, as well as interactive. Microphones are set up around the space, recording sounds of the Seminario; sometimes they are purely atmospheric, at other times, created by onlookers moving through the space. As well as using the A.I. to generate an endless soundscape, the structure itself is used both to modulate the sound and physically represent it. 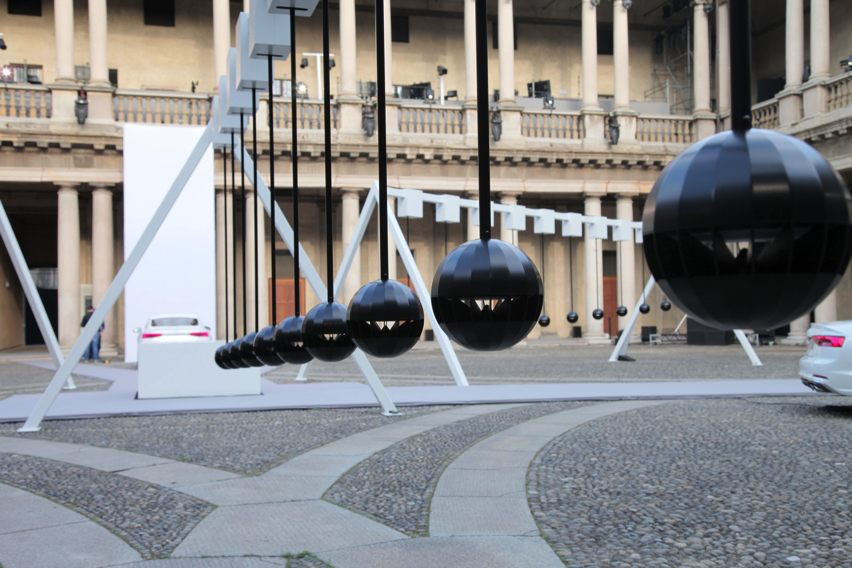 Comments Off on Sonic Pendulum: AI Soundspace of Tranquility #ArtTuesday