Today we celebrate, sci-fi and fantasy author and translator Ken Liu. Born in China, Liu moved to the United States when he was 11. He rose to international fame in literary circles with his 2012 short story collection “The Paper Menagerie.” He also holds a law degree from Harvard. 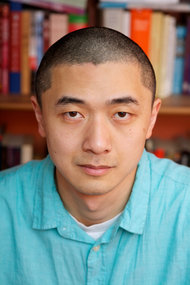 Mr. Liu’s debut novel, “The Grace of Kings,” published in April, is a reimagining of Chinese history, in which two young men set out to revolutionize the archipelago kingdom they call home, only to turn into rivals. The author has described the novel as silkpunk, a riff on the “steampunk” genre of fantasy writing that incorporates 19th-century design and technology.

Mr. Liu, who was born in Lanzhou, Gansu Province, migrated with his parents to the United States when he was 11 and went on to earn bachelor’s and law degrees from Harvard. In addition to writing and translating, he works as a litigation consultant on cases involving technology. In an interview, he discussed the literary uses of history, blending Western and Chinese traditions, and the meaning of silkpunk.

Comments Off on Ken Liu #AsianPacificAmericanHeritageMonth