Thanks to Les for sending this in! The M3 screws and nuts are a nice … touch! 😀 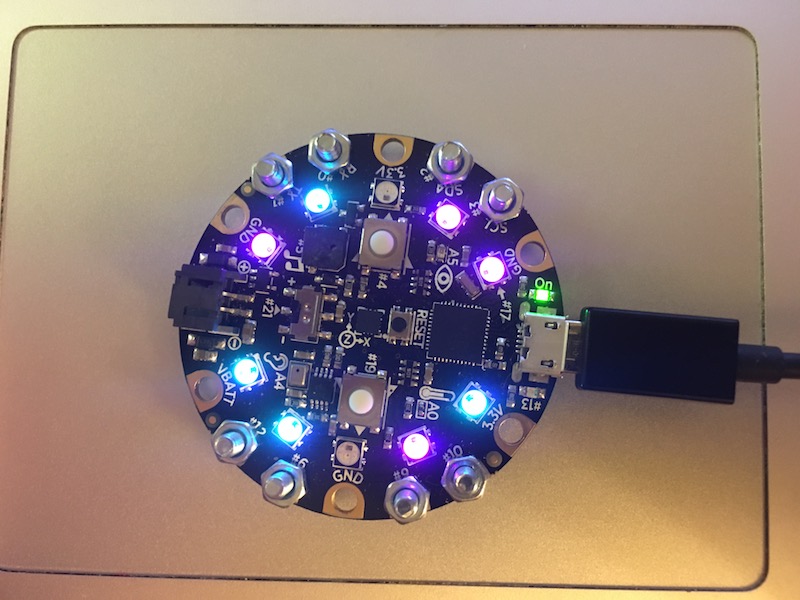 I was very impressed with John Park’s Password Vault (https://learn.adafruit.com/circuit-playground-password-vault/password-vault-coding?view=all) so I made my own version. The first attempt was unsuccessful but the second try I got it right. It’s nothing more than a Circuit Playground with M3 machine screws and M3 nuts in the eight terminals and some code, and it provides 65536 passwords. I didn’t even 3D print an enclosure for it but I guess Adafruit already posted one that is wrist-mountable.

The code is simple and now that I’m beginning to get the hang of GitHub I can share it if anyone wants it. The operation is very simple: You use capacitive touch on the eight bolts to set the LED’s either Magenta or Aqua (tasty colors IMHO), then press button one to set the seed of the random generator in binary. Then you repeat with the second button to select one of 256 pseudorandomly generated passwords. 256 x 256 = 65536 possible outputs, all grambly scrambly like a good password should be.

You could even go nuts with it – add yellow for trinary, RGB and black/white for octal on each pin, get the accelerometer in on it to tap out an entry key, and put a code in the software to create uniquely different password vaults.

The only problems I see at this point are that the passwords don’t go into my iOS devices so that’s a major bummer that the Bluefruit EZ-Key (https://www.adafruit.com/product/1535) should solve. Also if you lose your password vault, yer toasted. So make two of them and store the spare in a lock box I guess.

Yes. Now you just need another password vault protecting the lock box that the spare is stored in! (Like layers of an onion, people!)

You can find Les’s code here on the Adafruit forums.

And here’s the original Password Vault video (and project) that inspired Les’s mod: