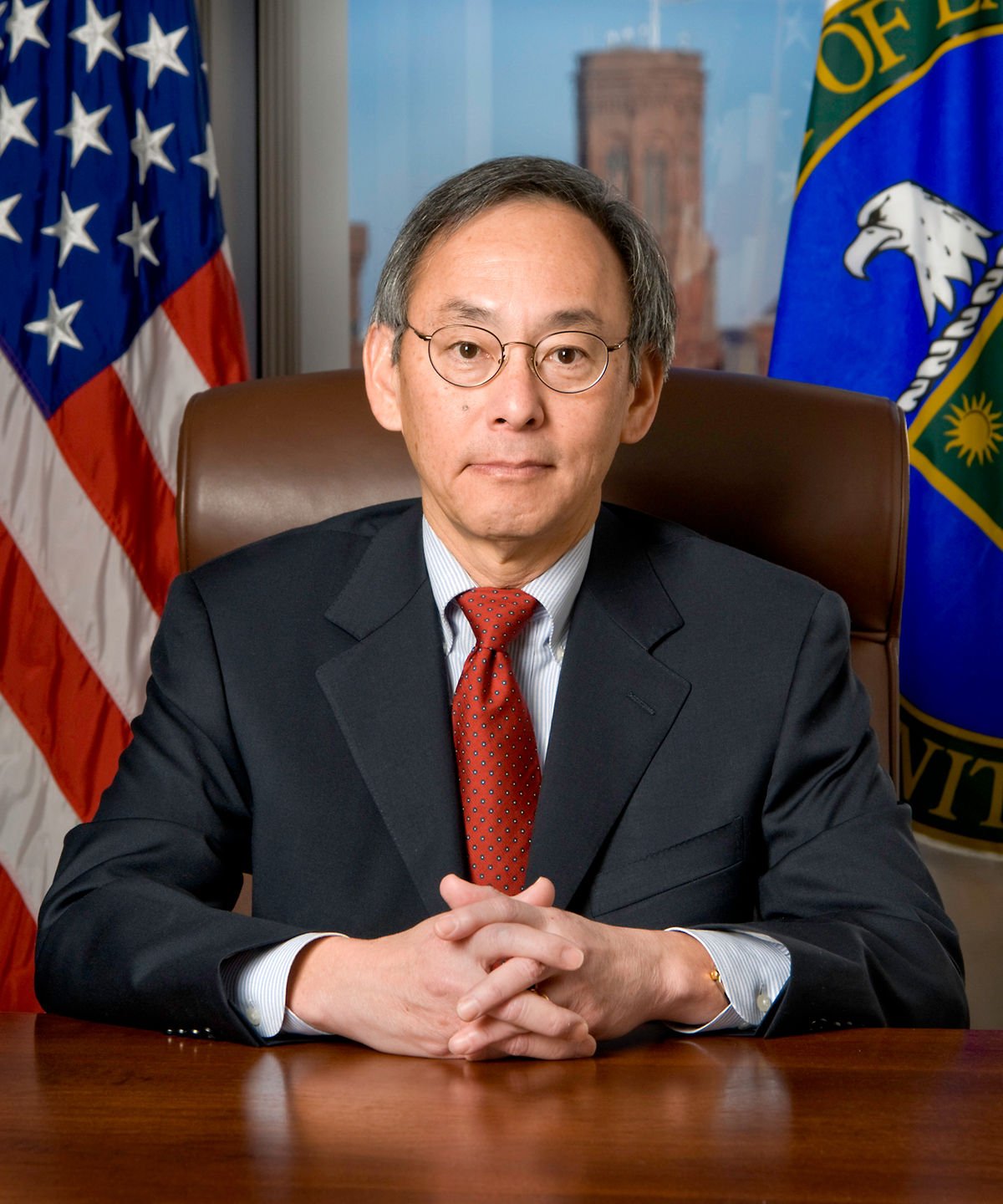 American Physicist Dr. Steven Chu served as the Secretary of Energy under President Obama. He is a distinguished scientist and winner of the Nobel prize for physics. Via Wikipedia

Chu was born in St. Louis, Missouri, with ancestry from Liuhe, Taicang, in Jiangsu, China, and graduated from Garden City High School. He received both a B.A. in mathematics and a B.S. in physics in 1970 from the University of Rochester. He went on to earn his Ph.D. in physics from the University of California, Berkeley, in 1976, during which he was supported by a National Science Foundation Graduate Research Fellowship.

Chu comes from a family of scholars. His father, Ju-Chin Chu, earned a doctorate in chemical engineering from MIT and taught at Washington University in St. Louis and Brooklyn Polytechnic Institute, and his mother studied economics. His maternal grandfather, Shu-tian Li, earned a Ph.D. from Cornell University, and was a professor and president of Tianjin University (Peiyang University). His mother’s uncle, Li Shu-hua, a physical scientist, studied physics at the Sorbonne before returning to China. Chu’s older brother, Gilbert Chu, is a professor of biochemistry and medicine at Stanford University. His younger brother, Morgan Chu, is a partner and former co-managing partner at the law firm Irell & Manella. According to Chu, his two brothers and four cousins have four Ph.D.s, three M.D.s, and a J.D. among them.

In 1997, he married Jean Fetter, a British-American Oxford-trained physicist. He has two sons, Geoffrey and Michael, from a previous marriage to Lisa Chu-Thielbar.

Chu is interested in sports such as baseball, swimming, and cycling. He taught himself tennis—by reading a book—in the eighth grade, and was a second-string substitute for the school team for three years. He also taught himself how to pole vault using bamboo poles obtained from the local carpet store.[10] Chu said he never learned to speak Chinese because his parents always spoke to their children in English.

After obtaining his doctorate remained at Berkeley as a postdoctoral researcher for two years before joining Bell Labs, where he and his several co-workers carried out his Nobel Prize-winning laser cooling work. He left Bell Labs and became a professor of physics at Stanford University in 1987, serving as the chair of its Physics Department from 1990 to 1993 and from 1999 to 2001. At Stanford, Chu and three others initiated the Bio-X program, which focuses on interdisciplinary research in biology and medicine,[28] and played a key role in securing the funding for the Kavli Institute for Particle Astrophysics and Cosmology. In August 2004, Chu was appointed as the director of the Lawrence Berkeley National Laboratory, a U.S. Department of Energy National Laboratory, and joined UC Berkeley’s Department of Physics and Department of Molecular and Cell Biology.[30] Under Chu’s leadership, the Lawrence Berkeley National Laboratory has been a center of research into biofuels and solar energy.[19] He spearheaded the laboratory’s Helios project, an initiative to develop methods of harnessing solar power as a source of renewable energy for transportation.

Chu’s early research focused on atomic physics by developing laser cooling techniques and the magneto-optical trapping of atoms using lasers. He and his co-workers at Bell Labs developed a way to cool atoms by employing six laser beams opposed in pairs and arranged in three directions at right angles to each other. Trapping atoms with this method allows scientists to study individual atoms with great accuracy. Additionally, the technique can be used to construct an atomic clock with great precision.