This year to celebrate National Paper Airplane Day we have rounded up some of our most popular paper airplane posts from the past! Be inspired and make one of your own today (maybe try this origami x-wing spaceship from Star Wars)!

Behind the amazing lego machine that folds and launches paper airplanes. via geek wire

Making a paper airplane that actually flies demands its own set of skills. Creating a robot out of Lego pieces to handle the task is something else, and genius Arthur Sacek was just the man for the job, The Awesomer tells us. It was all done in the name of a Super Bowl commercial for Arrow Electronics, a Colorado company which dabbles in aerospace and defense, among other things.

The Paper Planes of New York

Wonderful read from The New Yorker on the now deceased Harry Everett Smith and his paper airplane collection. Click through to see images of the beautiful airplanes.

Smith’s paper-airplane collection was one of the oddest of his many odd collections. (Among other things, he also accumulated string figures and Ukrainian Easter eggs.) Most of the paper airplanes were found in the streets and buildings of New York. (The map below plots the locations). Smith was “always, always, always looking” for new airplanes, one friend said: “He would run out in front of the cabs to get them, you know, before they got run over. I remember one time we saw one in the air and he was just running everywhere trying to figure out where it was going to be. He was just, like, out of his mind, completely. He couldn’t believe that he’d seen one. Someone, I guess, shot it from an upstairs building.” It’s not clear how many airplanes Smith collected in total; he would flatten them for storage, and friends recall seeing boxes and boxes of them. Smith’s “spiritual wife,” the Beat muse Rosebud Feliu Pettet, estimated that there were “multiple” boxes, “more than two, less than fifty.” Friends recall that Smith donated the bulk of his paper-airplane collection to the Smithsonian in the eighties. The museum sent a box containing two hundred and fifty-one planes, which he picked up between 1961 and 1983, to the Anthology Film Archive in 1994, at the request of the director of Smith’s personal archive, but it’s unclear what happened to the rest. The photos in this slide show are taken from a new collection, by J & L Books and the Anthology Film Archives, that contains images of all the airplanes in the surviving box. 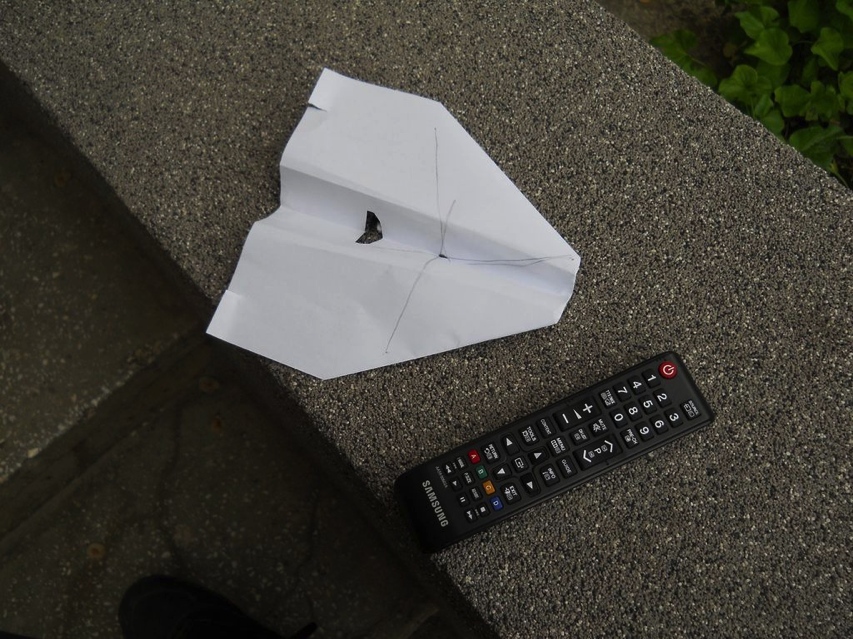 I love everything that flies. In my childhood I made a lot of paper airplanes, but they have a huge problem. After some minutes they fall down. So now I designed a small device that allows you to control the speed and the high of your airplane with a TV remote control. If you press any button on the remote the small motor starts to rotate the propeller and the plane accelerates. This thing can be suited to any paper plane, The weight of the full gadget is 9 gramms.

The power source is a small Li-Poly battery that can power up the circuit for about 10 minutes. It takes some time until you’ll learn to fly, but isn’t so hard. I made a lot of experiences with the circuit. This control unit can be used for others too, can drive LEDs, motors, relays or anything. Can be used for a home-automation project too. 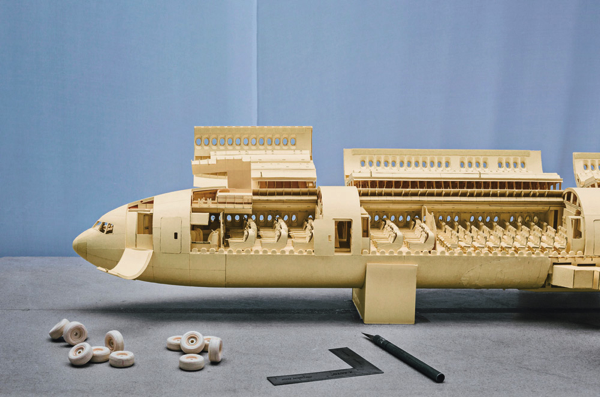 Wired has the story about these incredible objects made entirely from paper by Luca Iaconi-Stewart. This is taking paper planes to a whole new level!

Boeing can build a 777 in 50 days. Luca Iaconi-Stewart can build one too—in five years. True, Iaconi- Stewart made his 1:60-scale jetliner out of manila folders and dabs of glue, but it’s almost as complicated as the real deal, down to the retractable landing gear.

The idea for the project grew out of his love of airplanes—and the “massing models” he made from manila paper in a high school architecture class. Soon after he found a super-detailed diagram online of an Air India 777-300ER, Iaconi-Stewart was drawing forms in Adobe Illustrator, printing them on manila, and wielding his X-Acto knife. “There’s something rewarding about being able to replicate a part in such an unconventional medium,” he says.

Comments Off on Its National Paper Airplane Day! #NationalPaperAirplaneDay