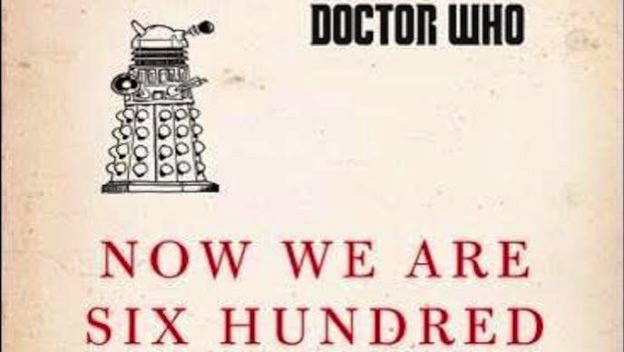 Steadfast with a penchant for getting in sticky situations, kindred spirits the Doctor and Winnie-the-Pooh find their worlds collide in a new collection of verse.

A riff on A.A. Milne’s classic Now We Are Six, BBC Books’ upcoming Now We Are Six Hundred compiles 50 ballads inspired by the world of Doctor Who.

“This is a collection of charming, funny and whimsical poems that celebrate the joys, sorrows, and wonders of Time Lord life,” according to the publisher.

Author James Goss—a regular contributor of Who and Torchwood tie-in novels and audio stories—called the job a “delight.”

“Who could resist retelling the fiendish Daleks’ Master Plan in verse?” he said in a statement. “Or finding bizarre and ludicrous rhymes for monster names?”

The real draw (because who actually likes to read poetry?) are the charming illustrations by former showrunner Russell T. Davies, in his first role as cartoonist.

“I’ve been drawing for Doctor Who long before I was writing it, so it was like time-travel for me, voyaging back to that young scribbler who used to cover his school desk with Daleks,” the writer and producer said.

“BBC Books have carefully baited an irresistible trap to lure people into reading poetry,” Goss joked. “Russell’s beautiful illustrations make this the most charming Doctor Who book there’s ever been (and I’m including that magical first Doctor Who book you discovered as a child).”