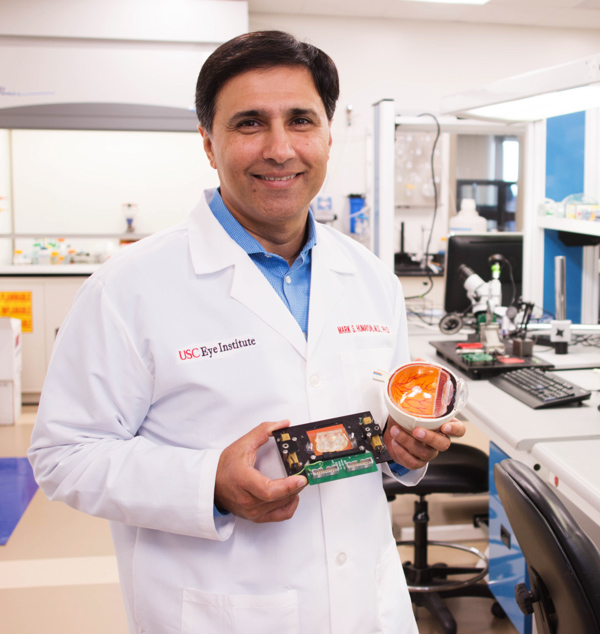 Mark S Humayun co-invented a bionic eye — the Argus Series retina implants that restoe sight. He is an ophthalmologist, engineer, scientist and inventor – the only ophthalmologist ever to be elected a member of both U.S. National Academies of Medicine and Engineering. Via Wikipedia

From The Atlantic article A Bionic Eye that Restores Sight

Humayun likes to compare the Argus II to VISOR, a fictional device in Star Trek: Next Generation worn by Geordi La Forge that similarly scans the electromagnetic spectrum and sends signals to the optic nerve. In fact, Humayun had come up with the idea for the Argus 10 years before the show aired, motivated by watching his grandmother lose her vision due to complications related to diabetes. “There wasn’t anything that could be done,” he says. “It made me reconsider my path in medicine.”

The Argus II works not by seeking to replicate that complexity, but by tapping into the eye’s natural abilities. It bridges the gap between visual signal and brain—or, as Mark Humayun, the Argus’ creator and an opthamologist at the University of Southern California’s Keck School of Medicine, puts it: “The software speaks in the biological language.” The device relies on a small video camera affixed to a pair of sunglasses, which sends visual data to an electrode-covered microchip implanted at the back of the eye. The electrodes stand in for the damaged retinal cells, transmitting electrical signals straight to the optic nerve. The user receives the information in the form of a 60-pixel, black-and-white image.