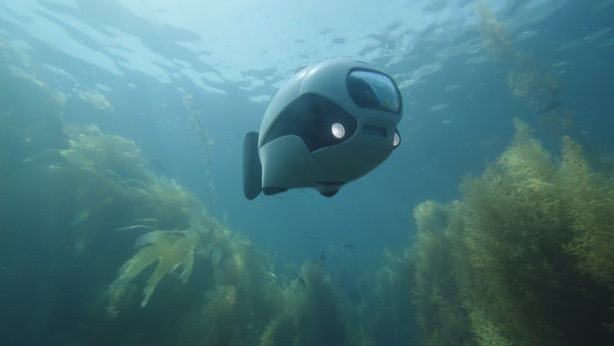 While there are already several camera-equipped underwater drones that allow you peek beneath the surface of your local waterways, they pretty much all have a couple of things in common – they’re propeller-driven, and they’re controlled via a physical tether that reaches to the surface. BIKI, however, is a bit different. It’s wirelessly controlled, and it “swims” by moving its fish-like tail.

When near the surface, BIKI can be controlled in real time via an iOS/Android app on the user’s smartphone, which also displays a live feed from the drone’s integrated 4K/30fps camera. If it’s going deeper, however, it either has to follow a dive route that’s been preprogrammed on the app, or it can be controlled in real time using a waterproof handheld remote that sends acoustic signals through the water.

Although the drone itself can go down to 196 ft (60 m), its remote has a control range of 33 ft (10 m). This means that if users want to control it in real time any deeper than 33 feet, they’ll have to put on scuba gear and go down there with it.

It should also be noted that once it goes deep, users will no longer be able to receive its live video feed. Although video will still be recorded on its 32GB of internal memory, that footage will have to be viewed after the dive. Two 114-lumen spotlights help illuminate whatever’s down there.

Comments Off on Underwater drone swims with – and LIKE – the fishes