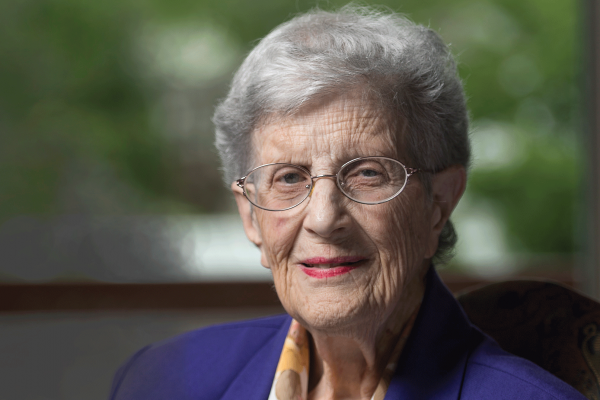 Jean E. Sammet, an American computer scientist who developed the FORMAC programming language and who served as the first female president of the Association for Computing Machinery, passed away on May 21 2017 at the age of 89. She was also one of the developers of the COBOL programming language, Via Wikipedia

Sammet was employed by Sperry Gyroscope from 1955 to 1958 where she supervised the first scientific programming group. From 1958 to 1961, she worked for Sylvania as a staff consultant for programming research and a member of the original COBOL group. She joined IBM in 1961 where she developed FORMAC, the first widely used computer language for symbolic manipulation of mathematical formulas. At IBM she researched the use of restricted English as a programming language and the use of natural language for mathematical programs. She was Programming Technology Planning Manager for the Federal Systems Division from 1968 to 1974, and was appointed Software Technology Manager in 1979.

Sammet founded the ACM Special Interest Committee on Symbolic and Algebraic Manipulation (SICSAM) in 1965 and was Chair of the Special Interest Group on Programming Languages (SIGPLAN). She was the first female president of the ACM, from 1974 to 1976.

Jean E. Sammet was born on March 23, 1928 in New York City. Jean and her sister Helen were born to Harry and Ruth Sammet who were both lawyers. Jean and Helen attended public elementary schools in Manhattan. Sammet had a strong interest in mathematics but was unable to attend the Bronx High School of Science because it did not accept girls. Instead, Sammet attended Julia Richman High School.

Sammet chose to enroll at Mount Holyoke College based on the strength of its mathematics program. Sammet majored in mathematics and took education courses, which allowed her to be certified to teach high school mathematics in New York. She minored in political science. After graduating from Mount Holyoke, Sammet pursued graduate studies at the University of Illinois, where she received her MA in 1949. While taking courses toward a Ph.D., she was a teaching assistant in the Mathematics department at the University of Illinois from 1948 to 1951.

In 1951 Sammet began looking for a position in education. Sammet was forced to search for positions in New Jersey because New York City was not hiring new teachers. The authorities in New Jersey determined that Sammet was missing two courses from her studies: a course in education and one in the history of New Jersey. Sammet fought this determination, stating that her knowledge of New Jersey history did not strengthen her ability to teach mathematics in high school. This forced Sammet to seek other types of employment.

In 1951, Sammet took a position at the Metropolitan Life Insurance Company as a trainee actuary. She agreed to participate in an in-house training program to learn about punched card accounting machines. Sammet took to the electronic accounting machines, but was unable to work with the machines after her training was complete. She left her position at the insurance office and enrolled at Columbia University to pursue a Ph.D. in mathematics. Sammet worked as a teaching assistant at Barnard College during the 1952-1953 school year before she decided that the academic life was not for her.

From 1953 to 1958, Sammet was a mathematician for Sperry Gyroscope in New York. She spent time working on mathematical analysis problems for clients and ran an analog computer. Sammet worked on the Department of the Navy’s submarine program during her time there. In early January 1955, Sammet began her life as a programmer. Sperry Gyroscope was working on a digital computer, the Sperry Electronic Digital Automatic Computer (SPEEDAC) and asked Sammet to be their programmer. Her first task was to write the basic loader for the SPEEDAC, which was a 20-line program that took three days to toggle into the computer by hand in binary.

Filed under: Women In STEM —
Tags: Women in history, women in STEM — by Jessie Mae