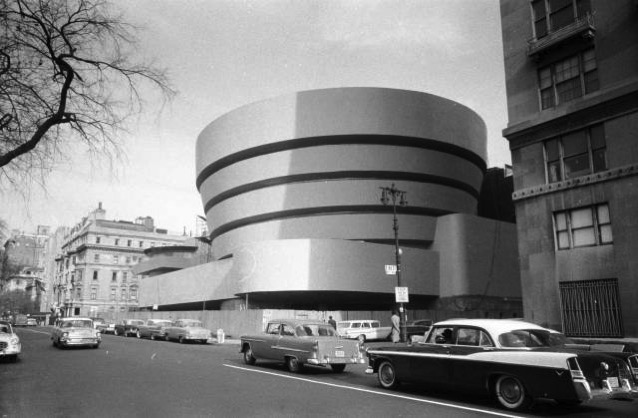 Gathamist shares look at the history of New York City and Frank Lloyd Wright. Everyone is familiar with the Guggenheim but what about Mark’s Towers?:

It’s Frank Lloyd Wright’s 150th birthday on June 8th, and the city’s biggest art institutions are showing their love for the renowned architect with huge retrospectives, all day parties, and Wright-inspired (temporary) tattoos. But while New York may love Wright, Wright certainly didn’t love New York—a place he considered a “pig pile,” a “fibrous tumor” and “a great monument to the power of money and greed.” That disdain may have something to do with why there are only a couple of his works still standing here. But our city’s relative lack of Wright is also due to some inexplicable circumstances in which buildings designed by the country’s best known architect have essentially disappeared. Below, we examine Wright’s existing and demolished New York structures, as well as his plan to transform the East Village that never came to be. 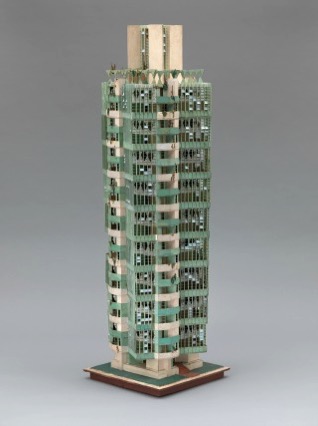 St. Mark’s Towers (Designed 1927 – 1931; never built)
In 1928, nearly three decades before Frank Lloyd Wright’s first structure went up in New York City, the modernist architect unveiled a “revolutionary” plan to transform the East Village skyline. His idea involved a triangle of all-glass towers at 11th Street and 2nd Avenue, to be commissioned by the St. Mark’s Church. Totally devoid of steel structures, the towers would be reinforced by a concrete “tap-root” core, a first for Wright according to MoMA, which currently holds the drawings. And while Wright considered our skyline a “medieval atrocity,” MoMA also notes that the three towers were “positioned apart from other tall buildings to avoid creating the dark urban canyons that Wright detested.”

Comments Off on Frank Lloyd Wright’s Enduring, Demolished, And Unrealized Contributions To NYC