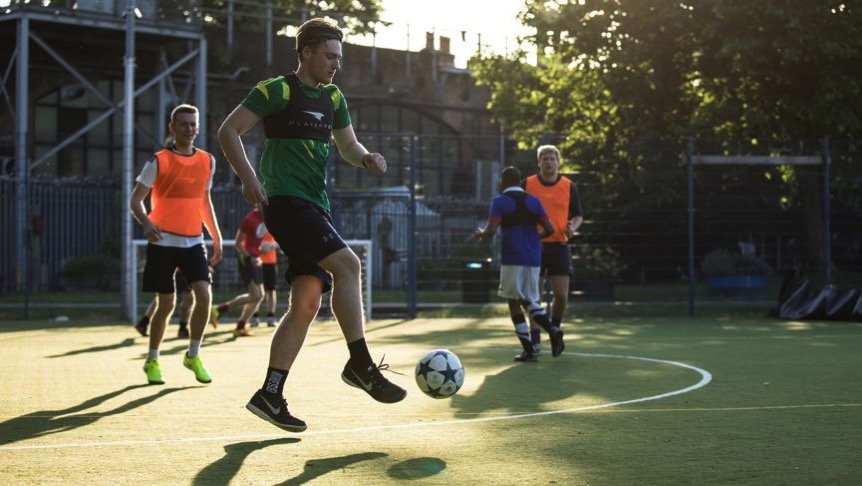 You’ve likely seen professionals wearing it during training sessions or revealing it during impromptu goal celebrations, but now Catapult Sport’s Playertek compression vest is making its way to grassroots football.

The result is players in Sunday leagues, five-a-side teams and everything in between tapping into heat maps, the distance they’ve covered during a game, how many sprints they burned through and their top speed — all through the power of a tracking pod that’s worn inside of a compression crop top.

But how does it work in the cauldron of a midweek five-a-side game? Well, Team Wareable strapped on the smart compression vests to find out.

The first step on your way to tracking in-game activity is pairing the Playertek sensor with the companion app, before then slipping it into a rubber case and then into a pocket located the back of the vest. Once you tap the button on the device and see two green lights flashing, you know you’re good to go.

I pulled over the vest and began tracking a light warm-up and the first of two 14-minute matches. Once you want to stop, all you need to do is hit the same button and head to the app to sync up your session.

This takes a couple of minutes and provides you with snapshots of your session once you’ve named it, chosen the match result, and interestingly, selected the pitch you just tore up. This uses Google Maps to help you pinch the total area of the field, and will remain saved within the app for future use.

Once you’ve added your savd session, you’re also given a percentage based on how it compares to a professional footballer at the same position.

In the heat of a game, the Playertek vest isn’t something you’re overly conscious of — even when I took the odd tumble, the sensor went unnoticed and never felt like it was ready to jetpack from the vest.

But in the background it’s tracking your every move in order to provide a post-game picture. Your halves will be split in order to display how your performance compared (in my case, it dropped significantly in the second half of the 14-minute games), with a five minute breakdown of your distance, top speed, sprints and sprint distance provided.

Of course, these insights are limited somewhat by how short the games were and how positions are often mixed in the likes of five-a-side, but it still offers you a fun surface take of your game. Take the game below as an example, where a kilometre was covered on the small pitch.

Learn more and get your own at playertek.com Comments Off on PLAYERTEK – Wearable GPS trackers for competitive sports