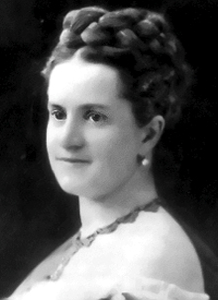 During the construction of the Brooklyn Bridge Emily Warren Roebling stepped in as field engineer when her husband fell ill.

Via the Roebling Museum:

Emily Warren Roebling was born on September 23, 1843 in Cold Spring, Putnam County, New York. She was one of a dozen children born to New York State assemblymen Sylvanus Warren and his wife Phebe Lickley Warren. Emily was unusually close to her older brother, Gouverneur Kemble Warren, who would eventually become a general in the United States Army. When Emily was fifteen her brother enrolled her in the Georgetown Visitation Convent in Washington D.C. to further advance his favorite younger sibling. While at Georgetown Visitation, Emily studied a wide variety of subjects including history, geography, rhetoric and grammar, algebra, French, as well as housekeeping, tapestry, and piano.

After contracting “the bends” Washington stated, “I thought I would succumb, but I had a strong tower to lean upon, my wife, a woman of infinite tact and wisest counsel.” Emily Warren Roebling would prove her husband’s praise to be true by undertaking multiple roles to ensure her husband would remain the Chief Engineer.