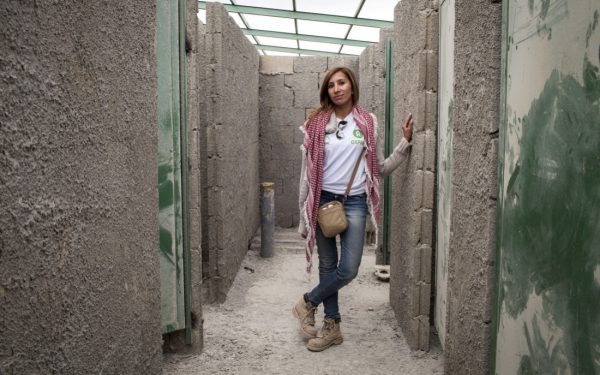 Earlier this year, Farah Al-Basha made a dramatic career change. The 27-year-old Jordanian engineer quit her job at a private company to join Oxfam’s effort to aid tens of thousands of refugees from the conflict in Syria.

Al-Basha and other members of Oxfam’s team in Zaatari focus on addressing the severe water and sanitation problems in the crowded camp. To combat the threat of waterborne diseases like cholera, Oxfam provided water tanks and taps to help 10,000 people get access to clean water, and has installed sanitation facilities including toilets, showers, and laundry areas. Work is underway to install 13 Oxfam tanks to facilitate water access for everyone in the camp.

More than 19,000 people have benefited from these efforts so far, and Oxfam hopes to reach even more in the weeks ahead.

“I wanted to help people here, to try to do something more for the community,” says Al-Basha of her reasons for joining the effort. But she admits her first visit to the camp was a bit of a shock.

Over the past two years, over one million people have fled the deadly conflict in Syria into neighboring countries. With a daily influx of 2,500 to 3,000 Syrians crossing into Jordan each day, Zaatari is now equivalent in size to the fifth-largest city in Jordan.

“It was the first time I have ever been to a refugee camp and, honestly, it was overwhelming,” she says. “I realized this job was going to be totally different in terms of what it required of me than my previous work.”

Al-Basha and her fellow engineers draw up plans, advise contractors, and carry out on-site inspections to ensure safety standards are met at every stage of construction. Her day-to-day work involves overseeing and inspecting the work of the (all-male) laborers and making sure everything goes according to plan—or if it doesn’t, finding solutions to daily problems.

“It’s been a life-changing experience for me,” says Al-Basha. “Helping to change people’s lives is not an easy thing to do.”