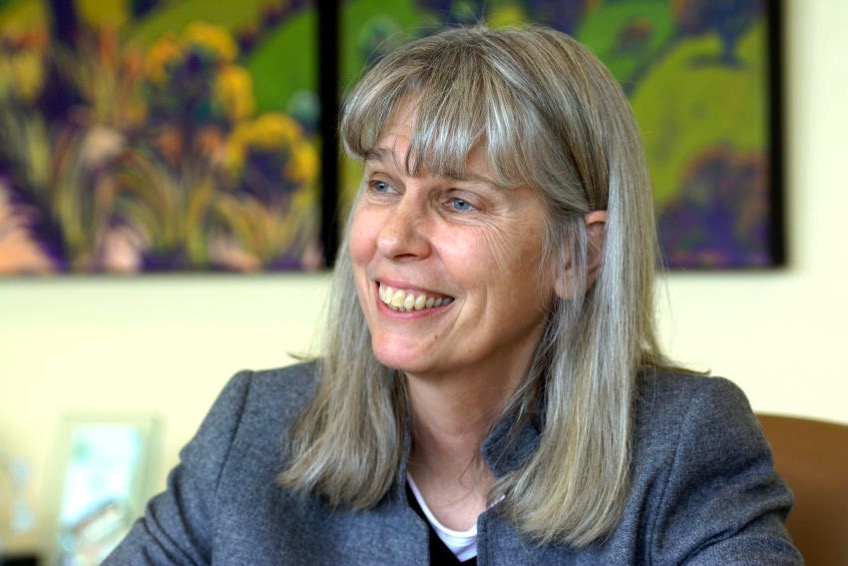 Jill Hruby had her first management position before she even had a high school diploma.
She was just 13 when she started working for the concessionaire at University of Michigan sporting events and not much older by the time she had her own crew reporting to her. Even her supervisors came to count on Hruby to mitigate the potential disasters associated with handling hungry, 100,000-fan crowds at one of the country’s most storied football stadiums.

“Occasionally, I’d get these calls (when off duty) – ‘You have to come in and help us; we’re way behind in getting the stock out’ or whatever,” Hruby says. “I remember one time … I got one of these calls and asked my dad to drive me to the football stadium. And we got there and my boss at the time was waiting behind the gate saying, ‘Oh, my god. Thanks.’ And my dad couldn’t believe it – first that I had a key to get into the football stadium, which he couldn’t believe because that’s a big deal to get into the Michigan football stadium, and that it was one of these things that was so urgent that my boss was waiting for me to arrive to take care of the issue.”

Others have been entrusting Hruby with major responsibility ever since.

• Hruby was on maternity leave after having her second daughter when Sandia promoted her to management in 1989, something she says shows the lab has a history of encouraging and promoting its female employees. “That was more than 25 years ago and so it’s nice to see it culminate in (having) the first female lab director,” she says.
• When she’s not working or traveling, you might see Hruby sipping an IPA at a local microbrewery. “I love the beer in Albuquerque,” she says, while diplomatically declining to single out one brewery as her favorite. “Having spent so much time in California, I became almost entirely a wine person but, in Albuquerque, I really think they have great beer and I miss it when I travel.”
• Hruby readily admits to having what she calls a “terrible sense of humor,” with an appreciation for puns and corny jokes. “My children hated it, although they really adopted it now that they’re (adults).”
Last year, Hruby was handed the figurative keys to another massive operation when she was named director at Sandia National Laboratories. With an annual operating budget of about $2.8 billion and about 11,000 employees – the bulk working on Sandia’s Albuquerque campus – she holds one of the highest-profile positions in New Mexico.

And she made some history in attaining it: Hruby is the first woman to ever head a U.S. nuclear weapons lab.

It was a role she says she never imagined. Despite having been promoted into a management position within six years of joining the laboratory’s Livermore, Calif., site and continuing to work her way up, she never saw herself as an obvious director candidate.

“There were lots of things that were working against me getting this position,” she says from her spacious office. “On some level, you could say logically ‘I’m on this path.’ (But) I was a woman, I had a master’s degree and not a Ph.D. I spent almost my entire career at Sandia in California, which is our small site. So there were so many things that made that improbable.”

But now that she’s there, she’s happy to make her mark.

“I really do hope that it does actually bust a stereotype that women both think more of themselves in the position, but also, more importantly, that everybody, men and women, recognize just different talent sets that might be their boss,” she says.