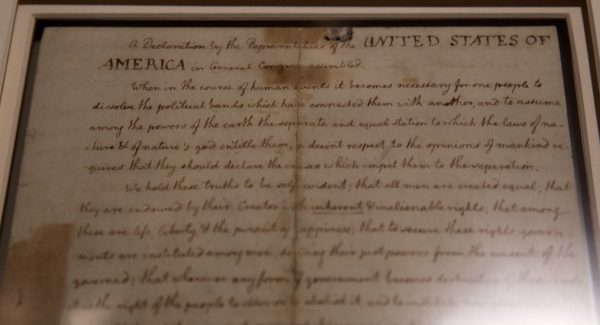 Language is a technology. It’s a particularly strange one that’s made of squiggles and sounds and maps of meaning, but like any other technology, it’s hackable. So’s writing.

One of the great secrets of writers is drafts. Nobody sees a first draft. And even pieces that are legendary for being oh-so raw often have a long history of development.

Sometimes it’s difficult to see this in works that have become writing classics, but even something as seemingly inevitable as the Declaration of Independence went through many revisions. And it had competition.

From David Greenberg’s articleAmerica’s 100 Other Declarations of Independence:

But in truth the Declaration wasn’t quite the singular achievement we remember it to be. As it turns out, nearly 100 other “declarations of independence” had already been issued in the months leading up to July 4th, 1776, by states, towns, counties, and assorted other bodies. The Declaration of Independence endorsed at the Continental Congress that July wasn’t a bolt out of the blue: It was more like a final draft in a loose, many-centered, wide-ranging process, authored not by one man but by a chorus of voices in a fledgling nation whose people had caught independence fever and were suddenly proclaiming it with contagious enthusiasm.

Today, when it often feels as if Americans are spiraling apart, becoming less connected to our political leaders and less bound to one another, it’s worth remembering what made independence possible wasn’t just a spirit of rebellion; it was the way that spirit was harnessed to a newfound commitment to self-government across the diverse colonies. What we celebrate today isn’t only the colonists’ unity in rejecting British rule but also the condition that made it possible: the trust that the colonists placed a group of leaders tasked with a historic decision, and the fidelity those leaders showed to the people’s wishes. We celebrate not just independence but also democracy.

The documents that the people drafted exhibited a striking consistency in their reasoning and language. In place of Paine’s sweeping calls for a new age of mankind, colonists offered detailed, particular, pragmatic reasons for severing their bonds with Britain. The “declaration” was a familiar form, a genre, with roots in British politics, and colonists emulated past declarations, especially the English Declaration of Rights of 1689, which had justified the deposition of King James II. Following this form, colonists enumerated the specific wrongs committed by King George, citing mainly the offenses of the last two years—especially the Prohibitory Act of 1775, which blockaded American ports—and not the longer train of incidents dating to the 1760s. Also common to most of these documents was the claim that the call for separation was a last resort—a step taken only because the king had rejected their previous entreaties and no alternatives remained.

In this climate, Richard Henry Lee of Virginia, on June 7, 1776, proposed to the Continental Congress that the colonies should be “free and independent states.” The Congress then named a drafting committee—which came to be called the Committee of Five—consisting of Jefferson, Franklin, Adams, Roger Sherman of Connecticut and Robert Livingston of New York. Jefferson, recognized as an eloquent writer, produced the first draft, borrowing ideas and tropes that were in the assorted declarations and that were, more generally, in the colonial air. (“He was no Moses receiving the Ten Commandments from the hand of God,” Maier noted, “but a man who had to prepare a written text with little time to waste and who … drew on earlier documents of his own and other people’s creation.”) In particular, he mimicked the practice of listing the particulars of King George’s “abuses and usurpations” that warranted the break: failing to recognize colonial laws; obstructing colonial trade; imposing oppressive taxes; quartering troops in colonists’ homes; and so forth. Like the previous documents, too, Jefferson’s framed the assertion of independence as a last resort, not undertaken “for light and transient causes.” On the contrary, he wrote, the colonists had repeatedly “petitioned for redress in the most humble terms,” but “our repeated petitions have been answered only by repeated injury.”

Comments Off on Writing Hacks: America’s 100 Other Declarations of Independence