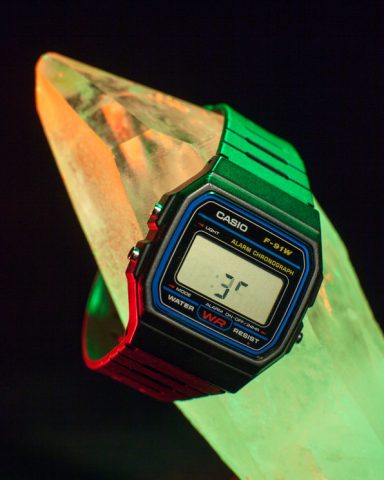 The Casio F91W is the Ford Model-T of digital timepieces. It’s cheap (retailing for around $19 today), its battery lasts forever (around seven years), and it’s remarkably durable. When it was introduced in 1991, the F91W was one of the only affordable digital watches on the market, and it’s remained amazingly popular…

Dexter Sinister launched their reverse-engineered F91W, which they call Watch Wyoscan, 0.5 Hz, on September 29th. Watch Wyoscan, which looks much like the F91W. In fact, its exterior body is exactly the same. What has changed is its guts. The designers removed the manufacturer’s circuitry and replaced it with what amounts to a tiny computer: new circuit boards and a new software, written by Wysocan.

Instead of displaying the time consistently across the watch’s quartz crystal face, the software only allows one segment of the familiar 7-segment number system to display at a time (watch the video to check it out). So instead of being able to glance at the time, the wearer is challenged to parse it out of a wave of segments that float from left to right across the screen. Or as Reinfurt notes, “it takes time to read the time.”