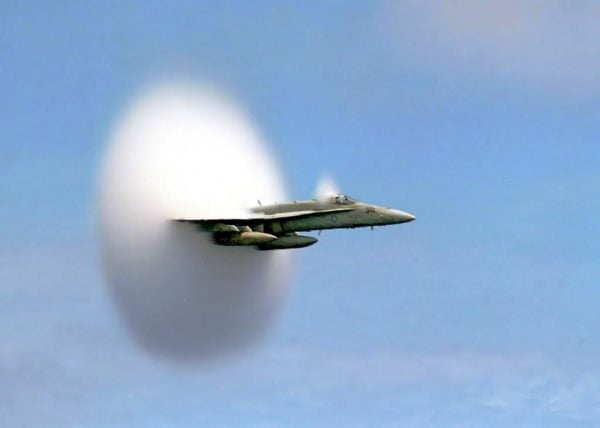 …what about the speed of sound? This is another barrier in physics, but one which humanity has been able to break (several times over in fact). And when it comes to breaking this barrier, scientists use what is known as a Mach Number to represent the flow boundary past the local speed of sound. In other words, pushing past the sound barrier is defined as Mach 1. So how fast do you have to be going to do that?

Another example [of objects breaking the sound barrier] is objects entering the Earth’s atmosphere. These can take the form of spacecraft performing re-entry, or meteorites that have passed through and broken up in Earth’s atmosphere. For example, the meteor that entered the skies above the above the small town of Chelyabinsk, Russia, in February of 2013 was traveling at a speed of about 19.16 ± 0.15 km/s (68,436 – 69,516 km/h; 42,524 – 43,195 mph).

Basically, the speed of sound is the distance traveled in a certain amount of time by a sound wave as it propagates through an elastic medium. As already noted, this is not a universal value, but comes down to the composition of the medium and the conditions of that medium.  When we talk of the speed of sound, we refer to the speed of sound in Earth’s atmosphere. But even that is subject to variation.

Comments Off on How Fast is Mach 1?