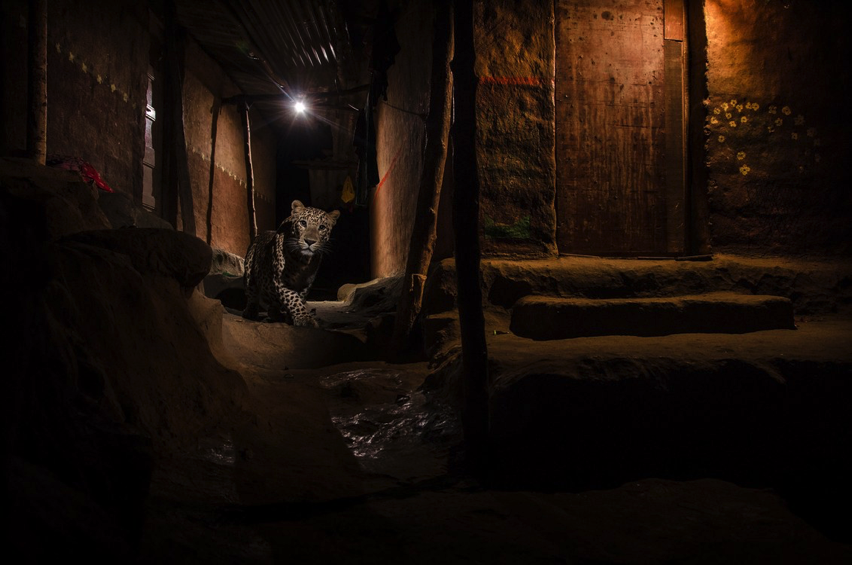 This series is beautiful and heartbreaking. Be sure to read the articles paired with each image! From Nayan Khanolkar:

It was around this time that Nayan realised that long-term monitoring of areas from where these conflicts were being reported was the need of the hour. An initial survey based on conflict history, media reports, infrared camera-trap images, local and forest department officials’ accounts, was undertaken to find out indirect evidence of leopard presence in the form of scat and scrape marks outside the Protected Area of SGNP at Aarey Colony and Film City. Debunking the image of the snarling, apparently dangerous big cats shown on T.V and in newspapers, Nayan and his team used powerful DSLR camera trap imagery to show the quiet, everyday existence of urban leopards. They observed leopard movement, placed camera traps in these locations and waited. It took a few days, and sometimes weeks of uncertainty and perseverance to obtain the images that Nayan had visualised. But the results were well worth the wait, more than capable of conveying the fact that these predators epitomised the adaptability and resilience of the very same Mumbaikars they were trying to convince that conflict is clearly a misnomer in a story essentially about coexistence.

Wildlife biologist Vidya Athreya’s pioneering work in rural Maharashtra discovered that capturing ‘problem’ leopards from farmlands and releasing them in forests was probably the primary cause for attacks. Forest officials, who had trapped leopards outside SGNP and released them in the park, now had an explanation for the spate of attacks in the early 2000s, which had severely jeopardised the leopards’ image as a coexisting neighbour.

Read more from Nayan Khanolkar and Wired or check out Episode 6 of Planet Earth II if you haven’t already.