Kysa Johnson’s paintings work similarly, but by different means. As Above So Below, Johnson’s first solo show with Von Lintel Gallery and her first in Los Angeles, consists of 12 colorful ink-on-board works representing cosmic phenomena like nebula, neutron stars, and star clouds, anchored by an installation in the back room. Johnson does not portray the universe as we see it in photographs from the Hubble Telescope, though those pictures are clearly among her points of departure. Rather, she creates her images by building up a palimpsest of subatomic decay patterns: the straight, curvilinear, and spiraling paths of these tiniest of particles, which scientists study using accelerators and electronic detectors. Like Solomon’s ring, these pictures are emblems of constant change. Atoms decay, stars die. 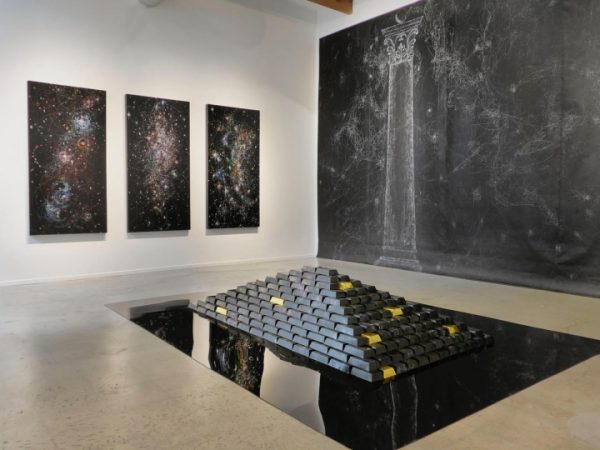 Johnson has constructed a visual alphabet of 11 different decay patterns, which she draws in brightly hued inks on a black ground, layering and arranging them to render specific celestial bodies, say the Orion Nebula or Centaurus A. The effect is something like the blackboard of a psychedelic physicist, 4th of July fireworks, or ribbons of swirling confetti. The large and spectacular “blow up 322 – the long goodbye (history of gold) – subatomic decay patterns and rapidly spinning neutron star PSR – B1509 – 58” (2017), is a good example. With webs of line glowing magenta, yellow, white, violet, and blue over glossy darkness, Johnson combines cosmic scale with the infinitesimal world of protons, neutrons, and electrons. Considering yourself in relation to either the galactic or the atomic tends to dramatically shift your perspective: No matter how good or bad your day is going, it’s not that big a deal to either the Horsehead Nebula or quantum mechanics.