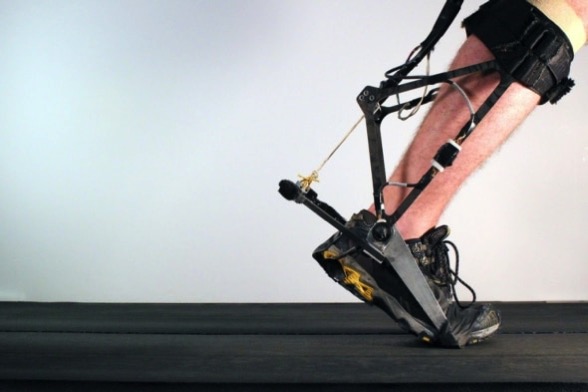 The promise of robotic exoskeletons has long offered the hope that motorized suits could one day restore movement to the disabled or grant soldiers and workers superhuman strength. But despite decades of hype, the fabled “exosuit” remains largely the stuff of Iron Man and science fiction, with most real-life prototypes quietly flopping or struggling to find a market. But the concept refuses to fade. Instead, researchers at Carnegie Mellon University and elsewhere are rethinking the design process, literally from the ground up.

The Carnegie Mellon team is pursuing a new approach that improves endurance by lowering the wearer’s energy exertion—a long-standing challenge for the field. Rather than attempting to build a conventional full-body or even a lower-body augmentation suit, they created a software-controlled ankle brace with the straightforward goal of reducing the effort needed to walk, making the motion less exhausting for people with physical impairments. Such simple devices—targeted, low-profile, even soft—could finally sidestep previous pitfalls to deliver practical and affordable exoskeletons, the researchers reported in a study last month in Science.

The algorithm that controls any exoskeleton’s movements must be tuned to provide precisely the timing and power the wearer needs. In this case, Steve Collins, an associate professor of mechanical engineering at Carnegie Mellon and principal investigator on the study, wanted the exoskeleton to automatically figure out how to minimize the wearer’s energy consumption while walking.

To test different assistance strategies, the team strapped each study participant into a spindly apparatus that applied exoskeleton-like torque to the ankle Participants were also hooked up to a breath monitor to measure their oxygen consumption—and by proxy their energy use. Using an “evolutionary algorithm” that repeatedly tries several combinations of torque and timing and then selects the best for further tinkering, the researchers cut energy use by about 14 percent compared with walking without the brace. That is a substantial improvement over any previous system.

Comments Off on Robotic Exoskeleton Adapts While It’s Worn