Infographic: Every Trip To The Moon, Ever 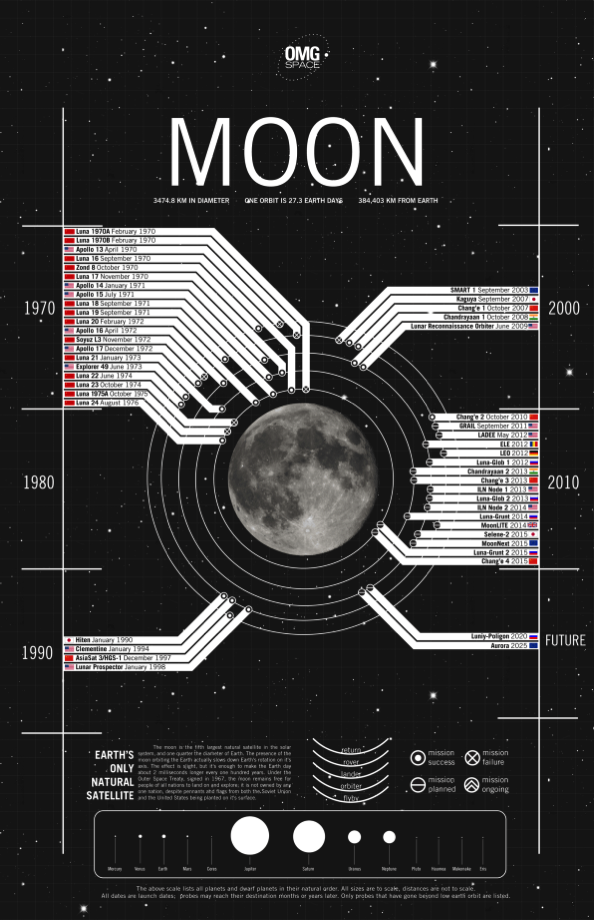 Once the U.S. planted a flag on the moon, it was easy to forget the trials and tribulations of the space race. But did you know that the United States and Soviet Union combined for eight failed missions to the moon within a single year? Eventually, the U.S. got the Pioneer 4 (their fifth attempt) to do a successful flyby in 1959. The Soviet Union followed a few months later by topping us big time–they actually landed with their Luna 2, a probe that looks straight out of 1960s sci-fi television.

It’s a story that you can follow in this pair of infographics created by Margot Trudell as part of her OCAD graduate thesis. They show every trip ever attempted or planned to the moon, be they flybys, probes, landers, or orbiters using a clever (if not entirely literal) scheme of concentric rings to convey the intent of each mission.

But if you like these infographics, you should check out Trudell’s entire graduate thesis, OMG Space. It’s one giant infographic website that explores our solar system on a true pixel scale. When I asked if we could share its grand graphic in full here, she explained that “the scale of the planets and the distances between them is too large to do in print.”

Comments Off on Infographic: Every Trip To The Moon, Ever