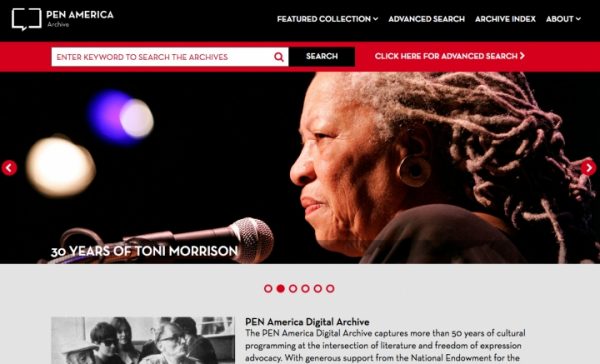 The PEN America Digital Archive launched on July 26 with over 1,500 hours of audio and video material newly accessible to the public, from theinaugural visit of Pablo Neruda to the United States, to Haruki Murakami’s first public speaking event. The archive chronicles 50 years of PEN America’s programming on literature and freedom of expression, featuring the voices of authors and advocates like Toni Morrison, James Baldwin, Susan Sontag, and Salman Rushdie.

On its site, PEN shared the origin story of the archive, adapted from text by Antonio Aiello, the former web editor and content director of PEN America who spearheaded the project. As Aiello describes, it was inspired by a 2011 visit to the PEN archives at Princeton University, where researchers found this material so fragile that it was unable to be heard:

“Arriving at the small, sun-filled reading room, eager to dive into recordings featuring the likes of Pablo Neruda, Susan Sontag, Toni Morrison, James Baldwin, and many more, our staff met a dead end: Princeton denied us access to the recordings. A loud argument ensued. Our staff insisted on seeing the collection; both the archivist and the curator said no. Our staff begged. The curator stood his ground. The recordings had been deemed so vulnerable that a single spin of a record through a player could cause irreparable damage that would render the recording unusable.”

Comments Off on From James Baldwin to Susan Sontag, Listen to Recordings from PEN America’s Vast Archive