Towering over the eastern Estonian city of Tartu is a lean chimney stack that features a 98-foot-tall mural of a girl holding a potted plant in her cupped hands. The image required 14 hours of labor and 40 cans of spray paint but zero manpower: it was rendered by a little robot that scuttled across the chimney’s surface with five cans of paint on its back — a device its inventors hope will revolutionize the mural industry. 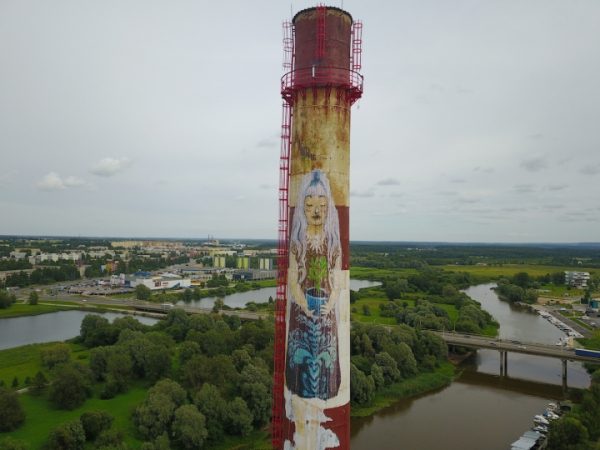 The robot was invented by Mikhel Joala, co-founder of SprayPrinter, a tech company focused on redesigning traditional methods of spray-painting. Previously, it released its namesake devise, a handheld printer that connects to your phone via bluetooth to let you spray-paint a digital image onto a wall, pixel by pixel. 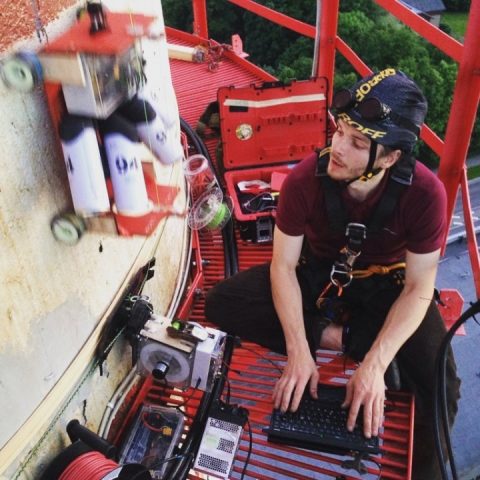 “Basically, the image file that the computer read was a text file consisting of coordinates and laser power values,” Aet Rebane of Sprayprinter explained to Hyperallergic. “The computer sent lines of code (called G-code) one by one to the main controller that executed the commands. Instead of a laser, we had a five-color printhead … Another controller measured the laser control pin for different pulse widths that ranged from about zero to 1,000 microseconds. Then these values were wirelessly sent to the printhead to trigger different colors, everything happening about 100 times per second.” The final image consists of many dots two centimeters in diameter that were stamped closely side by side, rather than solid strokes.

Filed under: art — by Zay