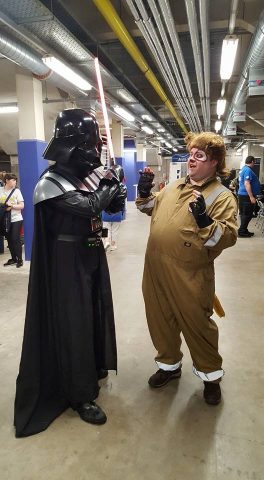 If you want to make a Spaceballs costume of Barf, you’re going to need to work with fur. Redditor Maffers chose the character for his first ever costume and got creative when it came to making the tail. He turned to pipe insulation for the base. He says:

I bought length of pipe insulation (it’s basically a pool noodle with a cut down one side, but 1/5th of the price, you’ll get it from a hardware shop). I then took a wire coat hanger and stretched it out, then taped to the inside of the foam tube. I trimmed one end to make it more pointy and taped it in place. Then I wrapped the whole thing in fur. I basically bought a big piece of fur and cut a strip off to wrap around. Had a seamstress stitch it down one side (inside out) to make a big fur sock and then fed the foam tube into it.

Comments Off on Spaceballs Costume with a Pipe Insulation Tail