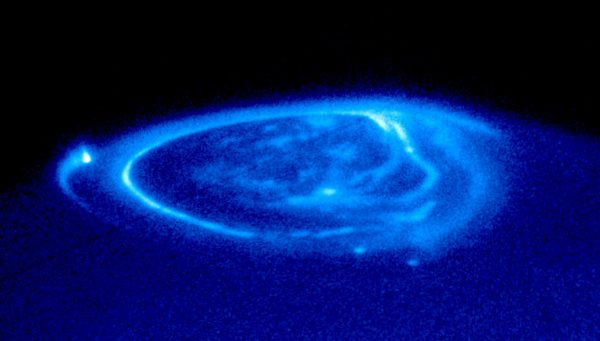 Jupiter’s auroras (depicted in this composite image) are by far the strongest in the solar system—and surprisingly, a new study finds, the brightest ones are not generated by the same processes that create our planet’s strongest auroras. On Earth, the brightest auroras (the high-altitude glows often called the northern and southern lights) are generated when electrons in outer space near Earth are accelerated by large electrical potentials, or voltages, along the lines in our planet’s magnetic field and slam into gas molecules in the upper atmosphere above polar regions. 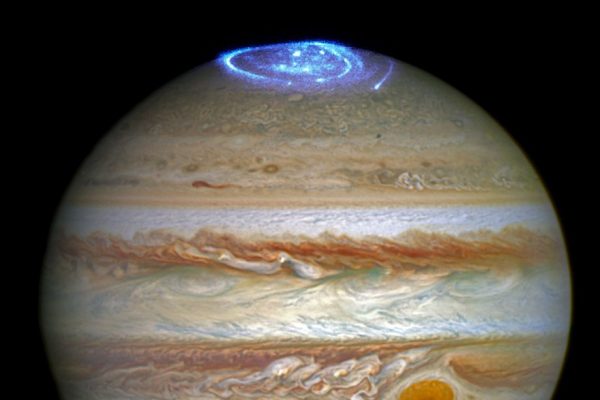 The same process, driven by even larger voltages, happens at Jupiter but plays an unexpectedly minor role in creating auroras there, the new analysis suggests. Scientists don’t fully understand what’s driving Jupiter’s strongest auroras, but data gathered by the orbiting Juno spacecraft hint that the electrons generating Jupiter’s polar glows may be accelerated by turbulent waves in the planet’s magnetic field—a process somewhat akin to surfers being driven shoreward ahead of breaking ocean waves, the researchers report today in Nature. Further analyses may help scientists better understand what’s going on in Jupiter’s atmosphere, scientists say. They could also help engineers better design probes that can survive repeated passes through the strong magnetic fields near Jupiter.

Comments Off on Jupiter’s Auroras Have Mysterious Power Source