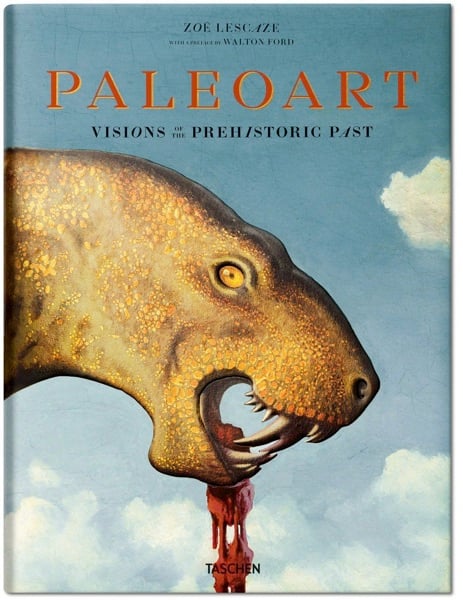 Great interview by SmithsonianMagazine with art historian Zoë Lescaze on her new book Paleoart: Visions of the Prehistoric Past from Taschen.

The history was the brain chile of Lescaze and artist Walton Ford, who contributes a forward and whose paintings are often a weird, satirical take on 19th-century naturalist paintings. Lescaze spent almost four years traveling the United States and Europe tracking the history of paleoart, which was inadvertently first developed in 1830 by scientist Henry Thomas De la Beche, founder of the British Geological Survey. Beche’s friend and neighbor, the fossil hunter Mary Anning, was making incredible finds including the first complete Plesiosaurus, but because of her sex, poverty and lack of education she received little recognition. To bring attention to Anning, Beche painted the watercolor “Duria Antiquior—A More Ancient Dorset,” illustrating her finds. Prints of the image became a bestseller.

That popular painting set off the entire genre. At first, Lescaze explains, the works were largely confined to scientific texts. But in 1854, British naturalist and artist Benjamin Waterhouse Hawkins displayed life-sized sculptures of dinosaurs at the Crystal Palace in London, introducing dinosaurs to a mass audience. Americans, too, caught the dinosaur bug, and illustrations of extinct animals soon infiltrated the academic and popular press and became common at natural history museums.