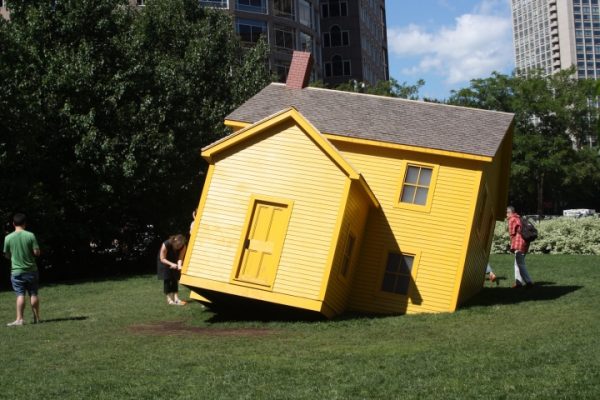 Nestled in the grassy Rose Kennedy Greenway downtown, The Meeting House is a site-specific structure of a precarious, partly sunken building that juts 14 feet into the air. Commissioned by the Rose Kennedy Greenway Conservancy, the piece is a Quaker-style house made up of 20 different parts using traditional woodworking techniques. 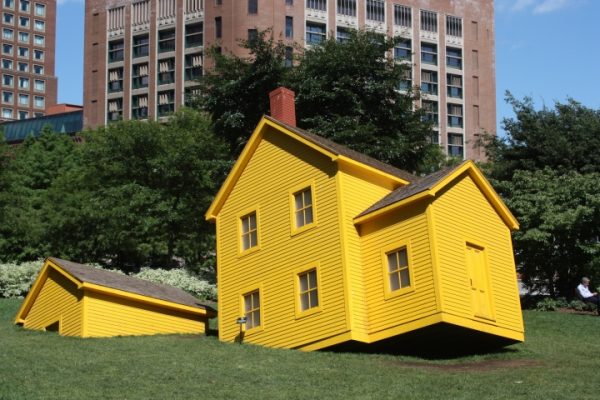 Artist Mark Reigelman II constructed the structure in pieces in Brooklyn and assembled it on-site. The massive yellow house is a topsy-turvy reconfiguration of colonial architecture from the surrounding Boston area, imitating the traditional Quaker-style meeting houses that served historically as community centers and gathering places. The piece was inspired specifically by the Pembroke Friends Meeting House, built in 1706, the oldest Quaker meeting house in Massachusetts. It also seeks to remind visitors of the “Big Dig” project that took place from 1991 to 2006, during which the city displaced thousands of citizens from their homes in order to construct an elevated highway, which includes the 1.5-mile Greenway on which The Meeting House sits. Whereas such a structure looks out of place surrounded by looming skyscrapers, a couple decades ago it would have been surrounded by the context of other residential structures.