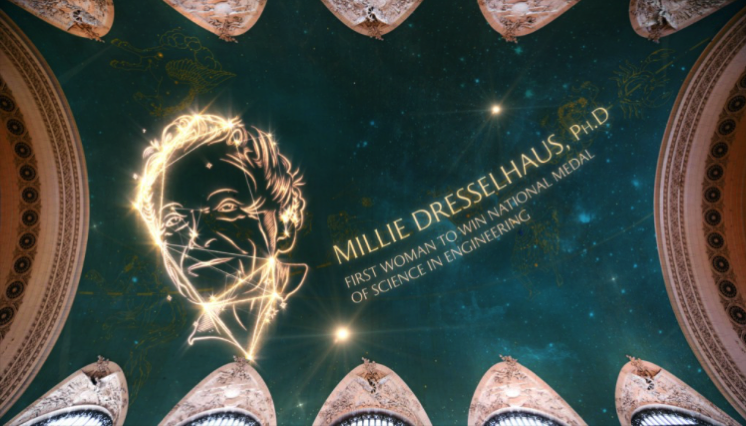 The ceiling of Grand Central in New York will be lit up with influential “constellations” of women in stem. Via Make:

The seven minute show features twelve women who have done amazing things for the advancement of science and technology. Their accomplishments span a number of disciplines and include women who have discovered new chemical elements, revolutionized cancer treatment, earned the National Medal of Science in Engineering, and more. These women represents scientists and engineers from both the past and the present who have not yet been fully celebrated. In this way, the hundreds of thousands of people who pass through Grand Central Station every day can learn about these women who they might not have heard of before.

“Unseen Stars” will be the first art installation of its kind to appear in the historic terminal. To create the projection mapped animation, GE teamed up with Obscura, a design company that specializes in large scale projection mapping. Lighting up the 275 foot long, 120 foot wide arched ceiling is no easy task. Obscura starts with a laser scan to create a 3D model of the space, so that the projected images align perfectly and that the designers can incorporate the architectural details. The show they’ve created animates the stars in the existing mural, morphing them into new constellations.

This light show will only be gracing the ceiling of Grand Central Station for a short time, so if you’re in New York City between September 19 – 21 be sure to check out this celebration of women in science.

Check it out while you can!!: