A Machine That Made Stockings Helped Kick Off the Industrial Revolution 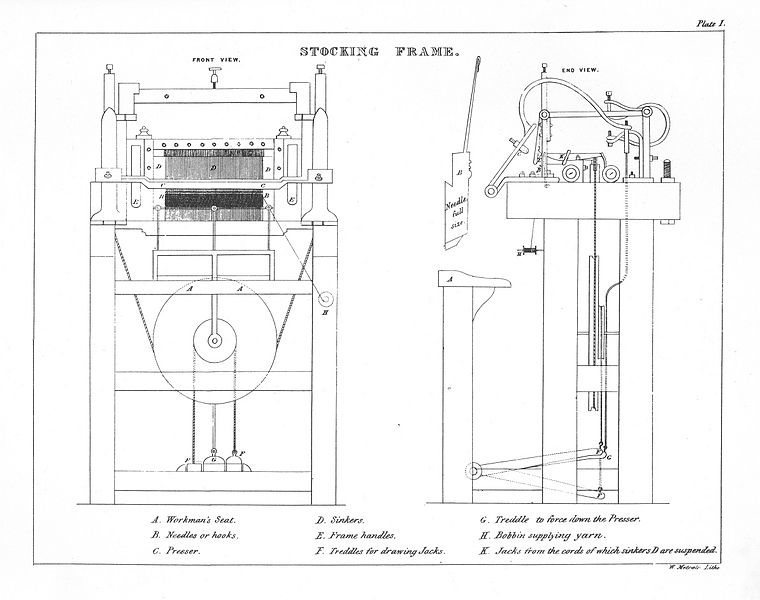 This piece from Atlas Obscura looks at the role stocking manufacturing played in the Industrial Revolution.

In the early 1590s, Lord Hunsdon, a chamberlain of Queen Elizabeth I, brought her an object to consider, one that he considered a marvelous invention. It was a stocking, somewhat coarsely woven. The queen was known for her fondness for these undergarments; she had first received a pair at Christmas in 1561, from her silk woman, one Mrs. Montague. In the 16th century, both women and men covered their legs with hosiery, knit by hand and stitched together in the form of a person’s leg. But these stockings were different. They were not hand-knit. They had been made by machine.

Queen Elizabeth had some sense of what mechanically produced stockings might mean, and she wanted none of it. “I have too much love for my poor people who obtain their bread by the employment of knitting to give my money to forward an invention that will tend to their ruin by depriving them of employment and thus making them beggars,” she pronounced.

Today, stockings are hardly the object of controversy. But from then to the early 19th century, machine-made stockings were at the forefront of the Industrial Revolution. European royals subsidized their manufacture, industrial spies went after the technology to make them, and political dissidents smashed the frames on which they were made. These delicate undergarments heralded the economic transformation that would change the world.