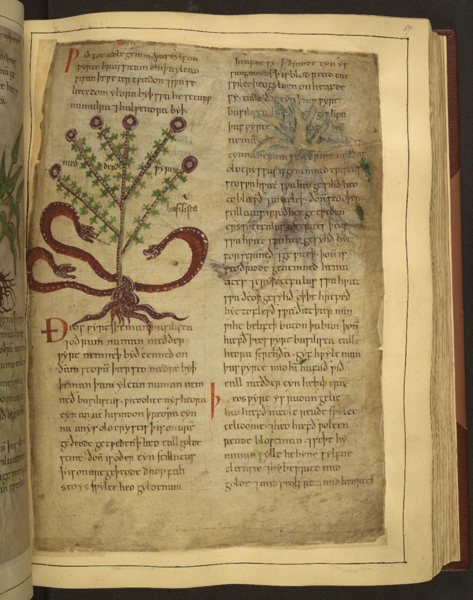 From the British Library Medieval Manuscripts Blog via Hyperallergic:

This manuscript (Cotton MS Vitellius C III) is the only surviving illustrated Old English herbal, or book describing plants and their uses. (There are other, non-illustrated manuscripts of the same text, for example in Harley MS 585.) The text is an Old English translation of a text which used to be attributed to a 4th-century writer known as Pseudo-Apuleius, now recognised as several different Late Antique authors whose texts were subsequently combined. The manuscript also includes Old English translations of Late Antique texts on the medicinal properties of badgers (framed as a fictional letter between Octavian and a king of Egypt) and another on medicines derived from parts of four-legged animals. Together, the herbal and the text on four-legged animals are now known as part of the so-called ‘Pseudo-Apuleius Complex’ of texts.

Each entry features an illustration of a plant or animal; its name in various languages; descriptions of ailments it can be used to treat; and instructions for finding and preparing it. Remedies for poisonous bites were marked out with drawings of snakes and scorpions. For instance, a snake appears near the entry for sweet basil, called ‘snake plant’ (naedderwyrt), because it was reported to grow where snakes were found and to be useful against injuries caused by snakes.

Read more on the Medieval Manuscripts blog or Hyperallergic.