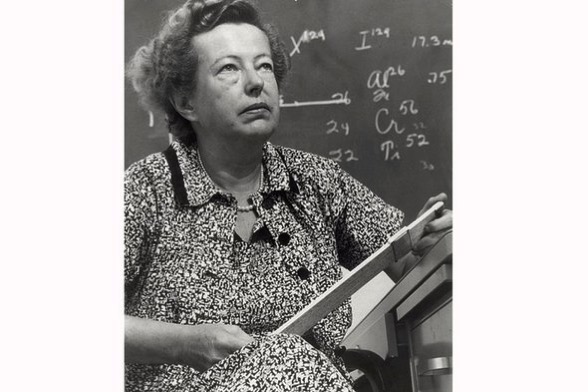 It’s been more than 50 years since there was a female winner. We look back at the life and legacy of Maria Goeppert Mayer, the winner in 1963

Physicist Wolfgang Pauli called her “The Onion Madonna,” after she discovered that the nucleus of the atom has an onionlike layered structure. Maria Goeppert Mayer, the last woman to win a Nobel Prize in Physics, claimed that honor in 1963.

Since then many other women have been widely considered worthy, too: Vera Rubin, who died last year, was regarded as a strong candidate for uncovering the existence of dark matter. Jocelyn Bell Burnell played a major role in discovering pulsars but was left off the relevant 1974 Nobel Prize snagged by her (male) graduate advisor. In 2014 Slate published a longer list of women contenders. But to date, Mayer and Marie Curie are the only women who have been named for this particular prestigious prize. That could change October 3 when the Nobel committee announces this year’s winner—but who knows?

With the Nobel announcements approaching yet again, I decided to look deeper into the life and work of Mayer, who is far from a household name. I drove to the sunny campus of the University of California, San Diego, where Mayer was a professor for the 12 years leading up to her death in 1972. At the university’s futuristic-looking Geisel Library, I pored through some of the hundreds of documents from Mayer’s life stored at the Special Collections department: hand-written letters, typed correspondence, notebook pages, postcards, invitations, certificates, photos, newspaper clippings—even the Western Union telegram informing Mayer of her Nobel win. They reveal a life of achievements as well as frustrations, ultimately filled with scientifically minded friends and great discovery.

Mayer was born in the German town of Kattowitz, now Katowice, Poland. An only child, she came from a long line of academics and would become the seventh-generation university professor in her family. She earned a PhD at the University of Göttingen in 1930, under the tutelage of Max Born, who would go on to win a physics Nobel himself. Many handwritten letters to Mayer in the archival boxes are from Born, spanning decades.

After graduating, Mayer moved with her husband, chemist Joseph Mayer, to the U.S. When her husband worked at Johns Hopkins University and later at Columbia University, Mayer pursued physics research at both institutions but received a full salary at neither. According to a short biography written at the time of her prize, “no university would think of employing the wife of a professor.” Another sign of the times: the archive has a 1941 typed letter informing Mayer that she was elected as a fellow of the American Physical Society—addressed “Dear Sir.” During World War II she worked on separating uranium isotopes for the Manhattan Project.
After the couple moved to Chicago in the mid-1940s, Mayer held a “voluntary” position at the University of Chicago, and a part-time senior physicist position at Argonne National Laboratory. During these Chicago years Mayer explored the topics for which she would achieve scientific fame. Knowing this, I excitedly flipped through pages of notes and equations scrawled in a small 1947 notebook with a giant letter Q on the front above the name “M. G. Mayer”—Q for quantum mechanics, of course.

Filed under: Women In STEM —
Tags: Physics, women in STEM — by Jessie Mae

Comments Off on Maria Goeppert Mayer: The Last Woman to Win a Physics Nobel