As part of our ongoing coverage of National Hispanic Heritage Month, today we are celebrating Daniel José Older. 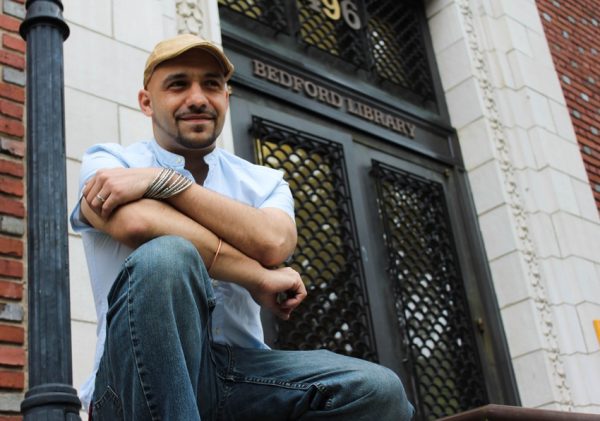 From The New York Times

In the best urban fantasy, the city is not just a backdrop, but functions as a character in its own right, offering up parallels between personal histories and histories of place. That is certainly true in Daniel José Older’s magnificent “Shadow­shaper,” which gives us a Brooklyn that is vital, authentic and under attack.

The book opens with Sierra Santiago painting an enormous mural of a dragon on the side of a building. “We hate the Tower,” Manny the Domino King tells her, explaining why her ­mural is important. “We spit on the Tower. Your paint is our nasty loogie, hocked upon the stupidity that is the Tower.”

The building is a perfect metaphor for the threat posed to Sierra’s Brooklyn. It’s a “five-story concrete monstrosity” built by developers who never bothered to finish it. Now it blocks Sierra’s view, towering over the brownstones around it, useless and imposing. It’s also a good metaphor for the book’s villain, who appropriates what he doesn’t understand and can’t use, nearly destroying a community because of his own hollowness.

This is the Brooklyn that stands to be lost. The Brooklyn that is under threat from various directions, not all of them magical. “Vincent had been killed by the cops three years back,” Sierra tells us, identifying the young man in a portrait on a ­cement wall. In that elegantly understated line, Older establishes police ­violence as an almost environmental threat, unpredictable and inevitable as a storm.

Until 2014, [Daniel José] Older worked by day as an emergency medical technician in Manhattan. He wrote mostly at night. And he sees himself, explicitly, as an outsider to the literary and publishing scene: “I entered the writing work clearly and strategically to do this thing, to write these books, to get them into the world and fuck with people, and to generally fuck shit up,” he says at a restaurant in Brooklyn.

Shadowshaper is set in the Bedford-Stuyvesant neighbourhood of Brooklyn, where Older lives. The protagonist, a young Afro-Latina named Sierra, learns about her family’s history of supernatural powers. She can, as it turns out, interact with the spirit world. Her family has gone to great lengths to conceal that fact from her, but now it’s Sierra’s responsibility to protect them from what’s coming.

Older’s imagined Brooklyn is full of danger, less gentrified than the real-life version, and decidedly diverse. “We’re doing something very political by deciding whose life matters, where we’re going to focus things, and who we erase from the picture,” he says. This kind of diversity, he feels, is lacking in most other fantasy YA novels. “When we create worlds based on this world that don’t include diversity, we’re lying,” he says. “We’re not being honest as authors. Even if it’s infused with magical powers, or zombies, or whatever you’ll have, we should still be trying to tell the truth. Then, it becomes a question of what truth, how are we telling it, and whose truth do we take the time to repeat?”

Older is critical of books that he says fail to include racial diversity – such as, he says, The Hunger Games. He chalks it up to a “phenomenal lack of imagination” on the part of the author, and a laziness, he feels, that is designed to keep some people out of the picture. “To be able to figure out all these quirky things about what you imagine the future will be like, and not somehow have any folks of colour doing anything heroic or worthwhile in it, what happened?” he asked. “Where did we go?”