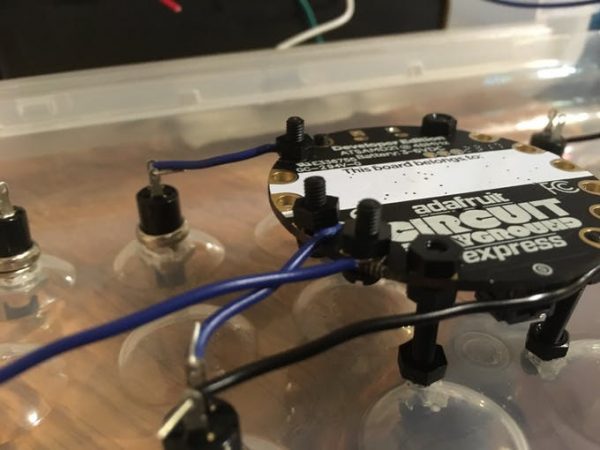 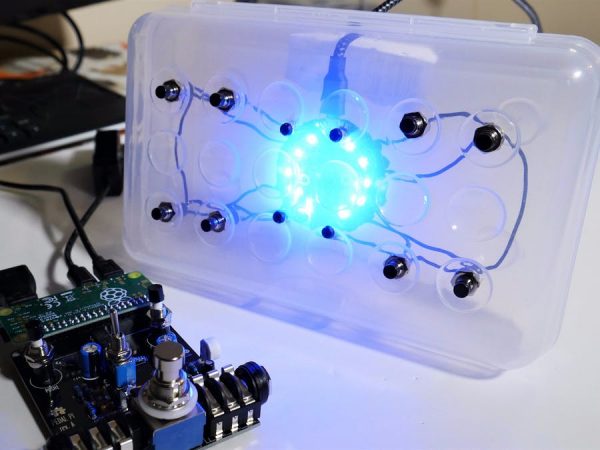 They have their own packaged ISO of Raspbian Jessie Lite that includes their self-written effects scripts so that you can change effects via the terminal, since the Lite distro does not have a GUI (of course you can use a version of Raspbian w/ a GUI if that’s more your style, but personally for this application I think sans-GUI is the way to go). The only thing that I eventually found to be a bit awkward with the pedal was the act of changing effects. As a guitarist, I’m used to switching things around with my feet so that I can keep playing or not have to awkwardly balance my guitar. Typing into the terminal to change effects was a bit cumbersome so I decided to make a controller to print strings in the terminal to control the Pedal Pi.

I’ve been leaning towards Adafruit m0 boards lately for their Circuit Python capability and the built-in USB HID feature without having to flash firmware. For this project I was also going for some aesthetics, namely some LEDs so I decided to go with the Circuit Playground Express, a circular board that features, well many things (it is a playground after all), but in this case I had my eye on the 10 NeoPixels available to animate. Of course going with the Circuit Playground I wasn’t getting the same number of digital I/O that I would with a Metro m0, which I did consider, but I decided instead of loading all of the effects as an option to switch between I would just select my favorites.