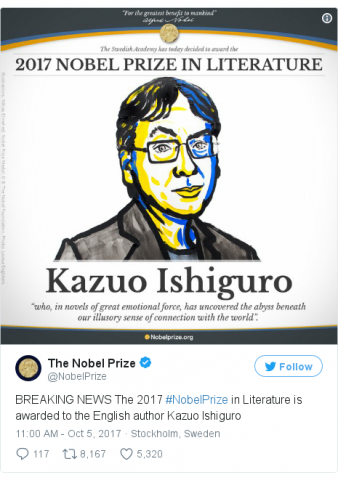 Congratulations to brilliant novelist Kazuo Ishiguro who has won the Nobel Prize in Literature. Though his work falls into many genres, his 2005 dystopian, sci-fi novel Never Let Me Go is one of my personal favorites. The best film adaptation of his work, in my opinion, is the beautiful 1993 drama The Remains of the Day, which stars Anthony Hopkins and Emma Thompson. The book is fantastic as well.

British writer Kazuo Ishiguro has won the 2017 Nobel Prize for Literature.
The novelist was praised by the Swedish Academy as a writer “who, in novels of great emotional force, has uncovered the abyss beneath our illusory sense of connection with the world”.
His most famous novels The Remains of the Day and Never Let Me Go were adapted into highly acclaimed films. He was made an OBE in 1995.
The 62-year-old writer said the award was “flabbergastingly flattering”.
He has written eight books, which have been translated into over 40 languages.

Filed under: Uncategorized — by Kelly

Comments Off on Kazuo Ishiguro: Nobel Literature Prize is ‘a magnificent honour’ #SciFiSunday