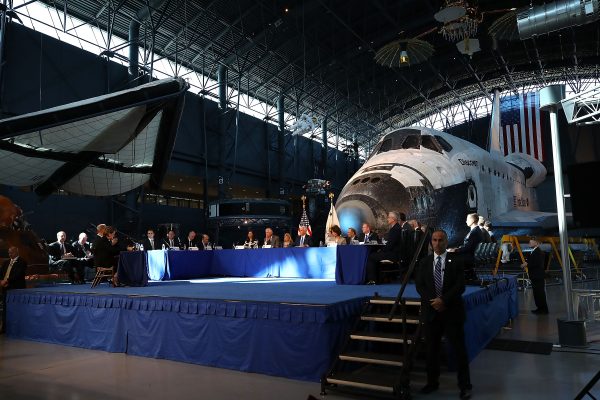 After months of hinting, Vice President Mike Pence finally made it clear today that the Trump administration will direct NASA to land humans on the Moon and establish a more permanent presence on the lunar surface. It’s a return to the vision of President George W. Bush, which was deferred when President Obama reoriented the space agency toward a journey to Mars.

Pence made the administration’s intentions known in a Wall Street Journal op-ed, as well as a speech he gave during the inaugural meeting of the National Space Council — a newly resurrected executive group aimed at guiding the US space agenda. “We will return NASA astronauts to the Moon — not only to leave behind footprints and flags, but to build the foundation, we need to send Americans to Mars and beyond,” he said to a crowd of representatives and press at the Smithsonian National Air and Space Museum’s Steven F. Udvar-Hazy Center in Chantilly, Virginia.

It’s a move that many within the space community have suspected for a while. Pence suggested a return to the Moon during a speech at NASA’s Kennedy Space Center in Florida in July. And many members of the National Space Council and Trump’s NASA transition team have been advocates of lunar missions. However it still marks a fundamental change for the space agency, which has been focused on sending humans to Mars since 2010 — without any plans for landing people on the Moon.