Use a GEMMA M0 to Make a Halloween Costume with Options! #ElectronicHalloween

Super fab project and write up from Stephen Cass on IEEE Spectrum:

Halloween is approaching, and with it a global parade of costumes. So I thought this would be the perfect time to try out a new wearable microcontroller from Adafruit Industries: the Gemma M0.

Adafruit has been putting out wearable microcontrollers for several years. These differ from conventional controllers, such as the Arduino Uno, in that the wearables are typically more compact and use pads with large through holes for input and output, instead of pins. These holes make it easy to sew boards to fabric or tie conductive thread to the pads. What makes the Gemma M0 particularly interesting is that it runs CircuitPython, Adafruit’s modified version of the Python language designed for embedded devices. (At this point, I should note that Limor Fried, the founder of Adafruit, is a member of IEEE Spectrum’s editorial advisory board, but she played no role in the origination of this article.)

CircuitPython caught my eye because I’m the Spectrum editor who oversees our annual Top Programming Languages online interactive. In the interactive, we group languages into different categories based on their typical usage. For the past couple of years, I’ve been getting a small number of complaints because we don’t list Python as an embedded language. (Even Guido van Rossum—Python’s creator—posted a huffy tweet about it.) As the number of actual embedded Python deployments has been a drop in the great software ocean, I’ve been okay with our call, but if Python starts being the basis of a notable share of makers’ microcontroller programs—currently dominated by the Arduino’s C/C++ style of code—we’d need to revisit that decision.

Before I could start getting a feel for the software, though, I needed to make my costume. I had a long, flexible strip of addressable WS1812B LEDs left over from making a color organ for a local monthly musical hackathon, and a US $17 “Nylon Horror Robe” costume purchased for a friend’s haunted house kids’ party last year. So I decided to combine these remnants with a cheap mask from an art supply store and the Gemma M0. The goal was to make a costume that could switch from “spooky” to “disco fun” on demand. 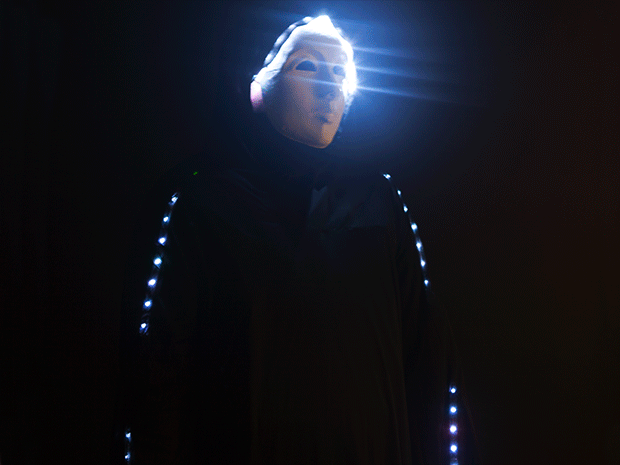 HAPPY HALLOWEEN! Every weekday this month we’ll be bringing you ideas and projects for an Electronic Halloween! Expect wearables, hacks & mods, costumes and more here on the Adafruit blog! Working on a project for Halloween this year? Share it with us on Google+, in the comments below, the Adafruit forums, Facebook, Instagram or Twitter— we’d love to see what you’re up to and share it with the world (tag your posts #ElectronicHalloween). You can also send us a blog tip! Tune in to our live shows, 3D hangouts with Noe and Pedro and Ask an Engineer, featuring store discount codes, ideas for projects, costumes, decorations, and more!

Comments Off on Use a GEMMA M0 to Make a Halloween Costume with Options! #ElectronicHalloween
Featured Adafruit Products