What’s That In the Dark? Creepy Blinky Eyes! #ElectronicHalloween

Douglas Campbell used some Adafruit NeoPixel LED strips to make these super creepy eyes that blink at you from the darkness! via hackster.io

This is an LED strip animation which is supposed to resemble pairs of glowing eyes that appear, blink a few times, then disappear again. The idea is that the lights could be hidden in shrubbery, under a porch, behind a dark window, etc, to give the impression of sinister monsters watching from the shadows!

In my first demo video, I was using LED strips that are inside a container, from another project. One thing you might notice is at the beginning and end, there is supposed to be a slow fade in/out. Instead, there is a stuttering, blinky appearance. This turned out to be a bug in my early code where I accidentally declared an 8-bit variable where I needed 32-bits.

Later I improved the code, including the fix for the fading, and turning off the WiFi on my Particle Core board, to conserve battery. The WiFi can be toggled on and off by clicking the MODE button. Mainly, this is a convenience so that I can turn WiFi back on for the purpose of OTA (over the air) firmware updates. But later, I might add animation controls that I can change via the Particle Cloud service, or using the Blynk app. 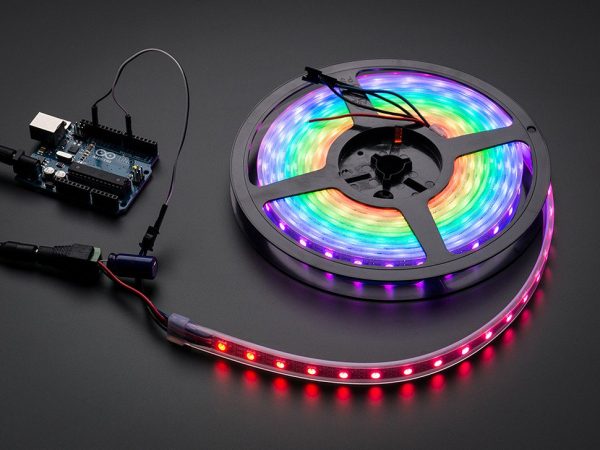 HAPPY HALLOWEEN! Every day this month we’ll be bringing you ideas and projects for an Electronic Halloween! Expect wearables, hacks & mods, costumes and more here on the Adafruit blog! Working on a project for Halloween this year? Share it with us on Google+, in the comments below, the Adafruit forums, Facebook, Instagram or Twitter— we’d love to see what you’re up to and share it with the world (tag your posts #ElectronicHalloween). You can also send us a blog tip! Tune in to our live shows, 3D hangouts with Noe and Pedro and Ask an Engineer, featuring store discount codes, ideas for projects, costumes, decorations, and more!

Comments Off on What’s That In the Dark? Creepy Blinky Eyes! #ElectronicHalloween