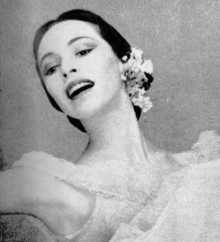 Almost from birth, Tall Chief was involved in dance, starting formal lessons at age three. When she was eight, her family relocated from her birth home of Fairfax, Oklahoma, to Los Angeles, California, to advance the careers of her and her younger sister, Marjorie. At age 17, she moved to New York City in search of a spot with a major ballet company, and, at the urging of her superiors, took the name Maria Tallchief. She spent the next five years with the Ballet Russe de Monte Carlo, where she met legendary choreographer George Balanchine. When Balanchine co-founded what would become the New York City Ballet in 1946, Tallchief became the company’s first star.

In Oklahoma, Tallchief was honored by the governor for both her ballet achievements and her pride in her American Indian heritage. The Legislature declared June 29, 1953, as “Maria Tallchief Day.”[9] She is among four Indian ballerinas depicted in “Flight of Spirit”, a mural in the Oklahoma Capitol building.

Comments Off on Maria Tallchief #NativeAmericanHeritageMonth