In the second of our Halloween viewing recommendation lists, we take a look at some of the horror films set in Adafruit’s home of New York. Many of the weirdest and wildest offerings in cinema history have come from New York, and as a new resident here, it’s been fun to explore a strange city through the familiar lens of these old films. I’ve tried to include links to help you find some of these filming locations where possible. If you missed the previous installment, catch up with “Ten Horror Films that Mix Scares with Science.” 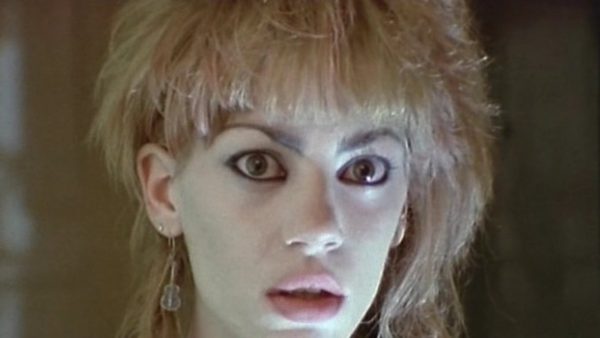 Abel Ferrara has made approximately three zillion films about New York City. This is his first feature that’s fit for print and perhaps the most polarizing. Conceived in the realities of late-1970s New York, we follow a young artist who, due to the ever-rising pressure of the city, begins to drift into increasingly violent fantasies. Living a double life, he paints his overdue masterpiece during the day and attacks people with a portable power drill in the night. The Driller Killer was banned in my home country until 1999. For better or worse, it’s no ordinary film. 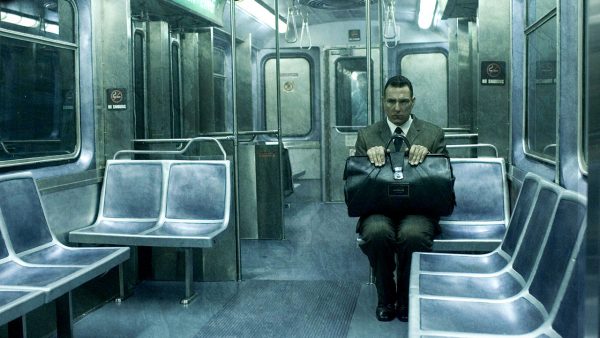 I’d previously had this at the very top of my list of awesome NYC horror films…until I found out it was filmed in Los Angeles. But in Clive Barker’s original short story, NYC (dubbed “The Palace of Delights”) itself is practically a living, breathing character, and I think you can still feel that in the film. Even if something was lost from the page to the screen between 1984 and 2008, you get a terrific glimpse at the city’s rotten core. An underrated chiller, it does itself a few disservices but is ultimately very effective in reaching its destination. The curious cast includes Bradley Cooper, Brooke Shields, Ted Raimi and Vinnie Jones.

In this polarizing sequel to Suspiria, a woman suspects evil is lurking in her unquestionably odd (and suspiciously spacious) Manhattan apartment building and is gradually proven right. Heavily influenced by alchemy, Inferno is dreamy, off-kilter and intensely stylish. Despite NYC being the film’s key setting, much of it was filmed in Rome. However, take a trip to the St. Walburga’s Academy in Harlem if you’d like to see the inspiration for the apartment complex in the film. 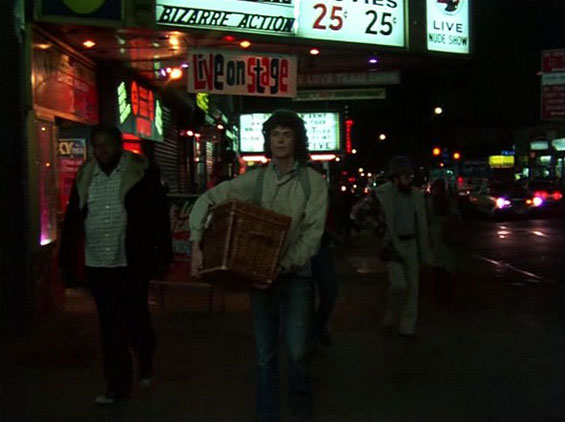 Frank Henenlotter’s debut feature film is one of the more heartening success stories to appear on this list. Following the exploits of an amiable out-of-towner named Duane who arrives in the city with a mysterious wicker basket containing his bloodthirsty siamese twin Belial, this shoe-string oddity earned itself two sequels in the early 1990s, which saw the fun spread to New Jersey and Georgia. The original remains a schlocky classic and contains some stunning shots of an unrecognizable Times Square. 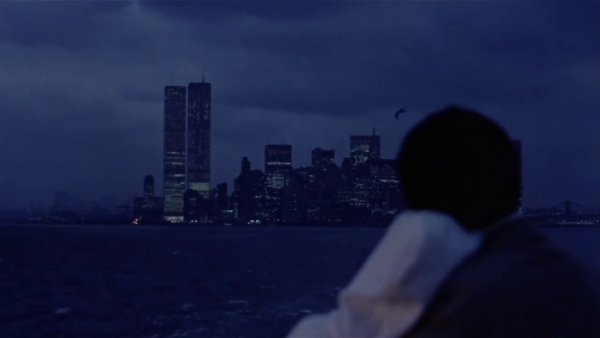 A listless journalist witnesses a murder through her apartment window and endeavours to solve the bloody crime herself. Margot Kidder in particular is exceptional in her complicated role. The Hitchcock-influenced Sisters gives us a beguiling ferry ride to Staten Island and far beyond.

“Staten Island? I thought you said you lived in New York?” 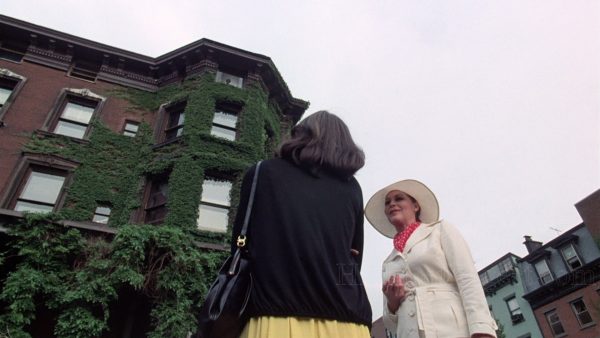 The Sentinel is Rosemary’s Baby crossed with Lucio Fulci’s The Beyond but set in a Brooklyn brownstone and directed by the guy who made Death Wish. It’s pretty much exactly how that sounds. The Sentinel is a haunted house oddity with some major moral lapses. If you make the decision to watch this one, keep an eye out for a supporting cast that includes Christopher Walken, Burgess Meredith, John Carradine, Ava Gardner, Jerry Orbach, Martin Balsam, an oddly dubbed Jeff Goldblum and many others. This is a good one for sightseeing too as not only is the brownstone still standing today, but the “Northern Italy” scenes were filmed in the Cloisters in Upper Manhattan. 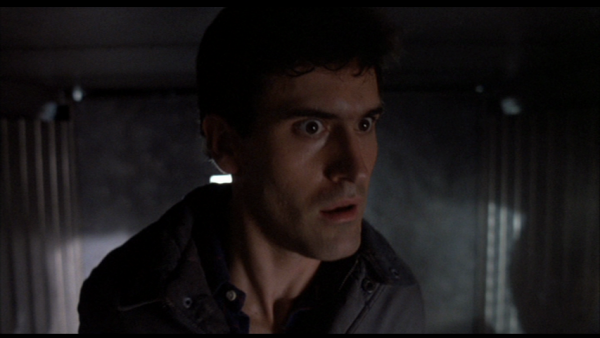 Bruce Campbell (The Evil Dead), Tom Atkins (The Fog) and Richard Roundtree (Shaft) star in this cult slasher. When a disgraced NYPD officer is murdered in prison, he rises from the grave to seek his revenge. This is a hugely entertaining and surprisingly enduring B-film from the post-Golden Age of the slasher. Director William Lustig gave an interesting interview on what it was like to make movies in NYC back in the 1980s, and he even helped with spotting a few of the film’s shooting locations in SoHo. 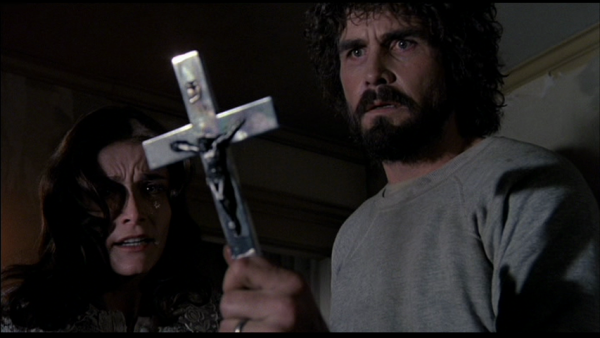 One of the most famous films on the list. Like Stepford Wives, Get Out and The House By the Cemetery, this classic tale of hauntings, possessions, murder and madness warns us that driller killers, midnight meat trains, maniac cops, rippers and gates of hell or not, we’re sometimes better off just staying in the city. Though house used during filming is actually in New Jersey, the original Dutch Colonial style house continues to keep Long Island creepy.

Honorable mentions: Zombie by Lucio Fulci from 1979. Though filmed largely in Santo Domingo, there’s the unforgettable scene where zombies march across the Brooklyn Bridge. Plus, one of the greatest of all time, The Exorcist, has scenes filmed on West 48th and on Roosevelt Island at the Coler-Goldwater Memorial Hospital. Then there’s Cloverfield and I Am Legend, which could have easily made our Science Horror list, not to mention Maniac, Get Out, Manhattan Baby and many many more.

Of course, we’re far from the first site to tout the horrors of New York. If you’d like to see some other efforts, there are great lists on ComingSoon, Blumhouse, Huffington Post, AXS and amNew York. We’re really just scratching the surface.

So, that’s that. I hope you all find something good to watch this Halloween season. It’s the most wonderful time of the year. Although…there is something I like about December: 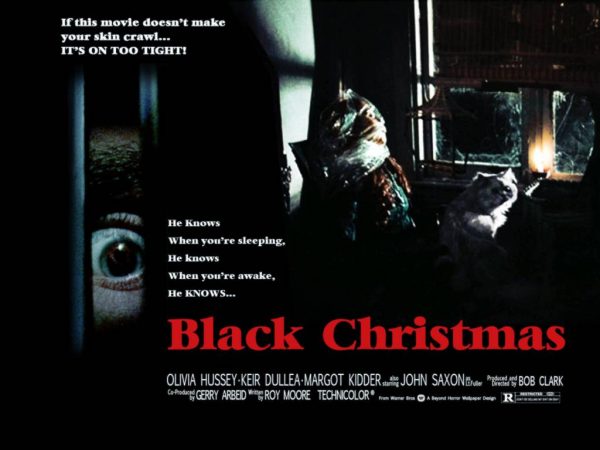