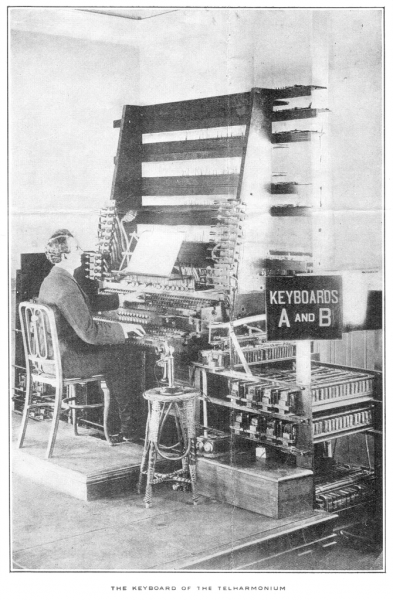 In 1906 Thaddeus Cahil built a 200 ton electronic synthesizer. It took thirty railroad cars to transport the machine from its construction site in Massechusetts to a Manhattan, where it was reconstructed in the basement of a building on Broadway and 39th. Cahil had a public performance as a way to drum up subscribers. Subscribers would get music transmitted to them through the telephone network.

So in 1906 a guy invented a giant proto-synthesizer to create the worlds’ first Spotify.  — via 120 Years of Electronic Music

In 1895 Thaddeus Cahill submitted his first patent for the Telharmonium “The Art of and Apparatus for Generating and Distributing Music Electrically”. The Telharmonium can be considered the first significant electronic musical instrument and was a method of electro-magnetically synthesising and distributing music over the new telephone networks of victorian America. 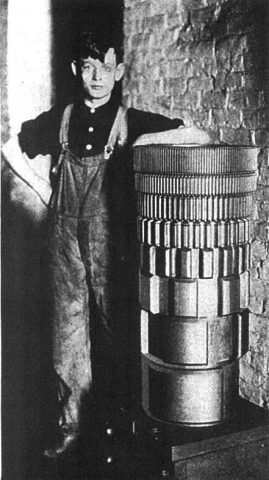 The core of his invention was the tone wheel; essentially a rotor with variably shaped alternators  that spun within a magnetic field (The early versions used rheotomes; a set of brushes that contacted the rotor as it spun.) to generate a tone. Each tone wheel was composed of the fundamental tone and six ascending partials. The first model consisted of a mainframe of twelve identical rotors each of the twelve pitch-rotors carried seven fundamental alternators, six third-partial alternators, and five fifth-partial alternators. These rotors were spun at the relevant speed by a belt driven motor, giving the instrument a six octave range. This arrangement gave the Telharmonium two tuning systems; one being a pure harmonic series used for building the timbre of each note, and the other, an equal tempered scale used for combining notes into a scale. 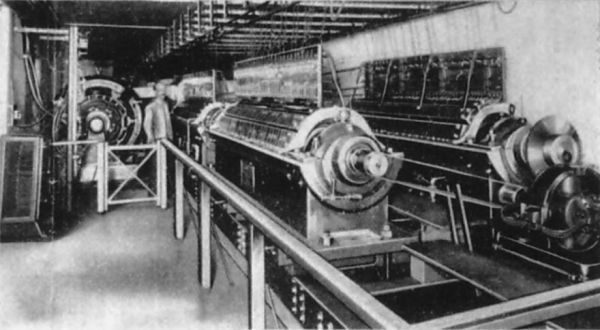 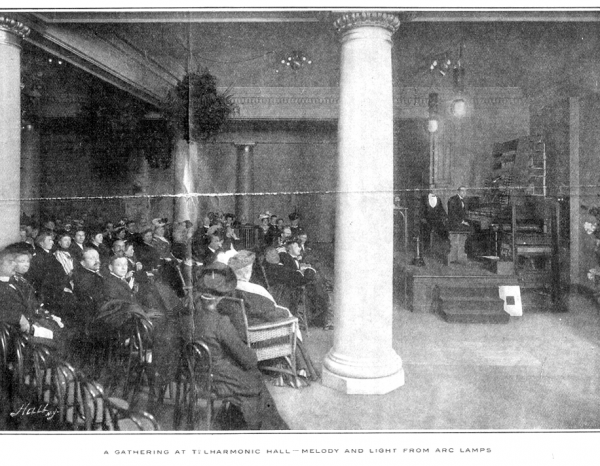 The first description of the sound of the Telharmonium was from Ray Stannard Baker writing for McClure’s magazine describing a demonstration of the Washington MkI Telharmonium at the Hotel Hamilton;

“The first impression the music makes upon the listener is its singular difference from any music ever heard before : in the fullness, roundness, completeness, of its tones. And truly it is different and more perfect: but strangely enough, while it possesses ranges of tones all its own, it can be made to imitate closely other musical instruments: the flute, oboe, bugle, French horn and ‘cello best of all, the piano and violin not as yet so perfectly. Ask the players for fife music and they play Dixie for you with the squealing of the pipes deceptively perfect. Indeed, the performer upon this marvelous machine, as I shall explain later, can “build up” any sort of tone he wishes : he can produce the perfect note of the flute or the imperfect note of the piano — though the present machine is not adapted to the production of all sorts of music, as future and more extensive machines may be.

Article in The Atlantic