The 13th Doctor Might Have Three New Companions! #SciFiSunday 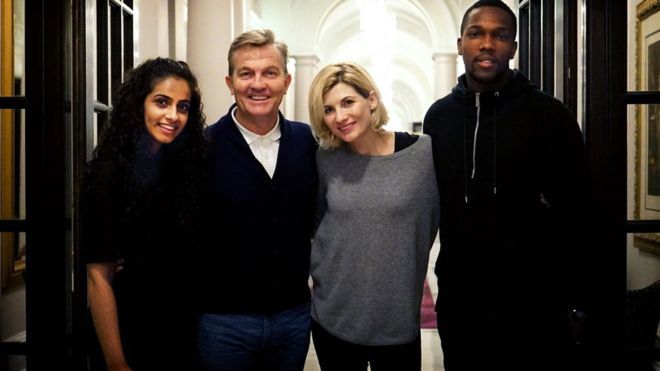 In an announcement over the weekend, it was revealed that the Thirteenth Doctor—played by Jodie Whittaker—will be accompanied by three series regulars in Doctor Who’s new season. There is no word on whether any of this trio will travel in the TARDIS (giving them the sacred “companion” title), but it seems safe to assume we’re headed in that direction. So who are these lovely folks and how will they fit into the tapestry of Whovian history?

The three new cast members are Bradley Walsh, Tosin Cole, and Mandip Gill in the roles of Graham, Ryan, and Yasmin respectively. Walsh is a professed lifelong Whovian who has been watching the show for 50 years and remembers seeing William Hartnell in black and white. He played a villain briefly on the Sarah Jane Adventures (The Pied Piper), but fans will likely know him best from his time hosting game shows like The Chase and The Wheel of Fortune, as well as a three year run on Coronation Street. Cole has worked on E20 and Hollyoaks, and also appeared behind the wheel of an X-Wing fighter during The Force Awakens as a member of Red Squadron. Gill was also on Hollyoaks for three years, and has also appeared on Doctors, Cuckoo, Casualty, and the upcoming Lies and Records.

Comments Off on The 13th Doctor Might Have Three New Companions! #SciFiSunday