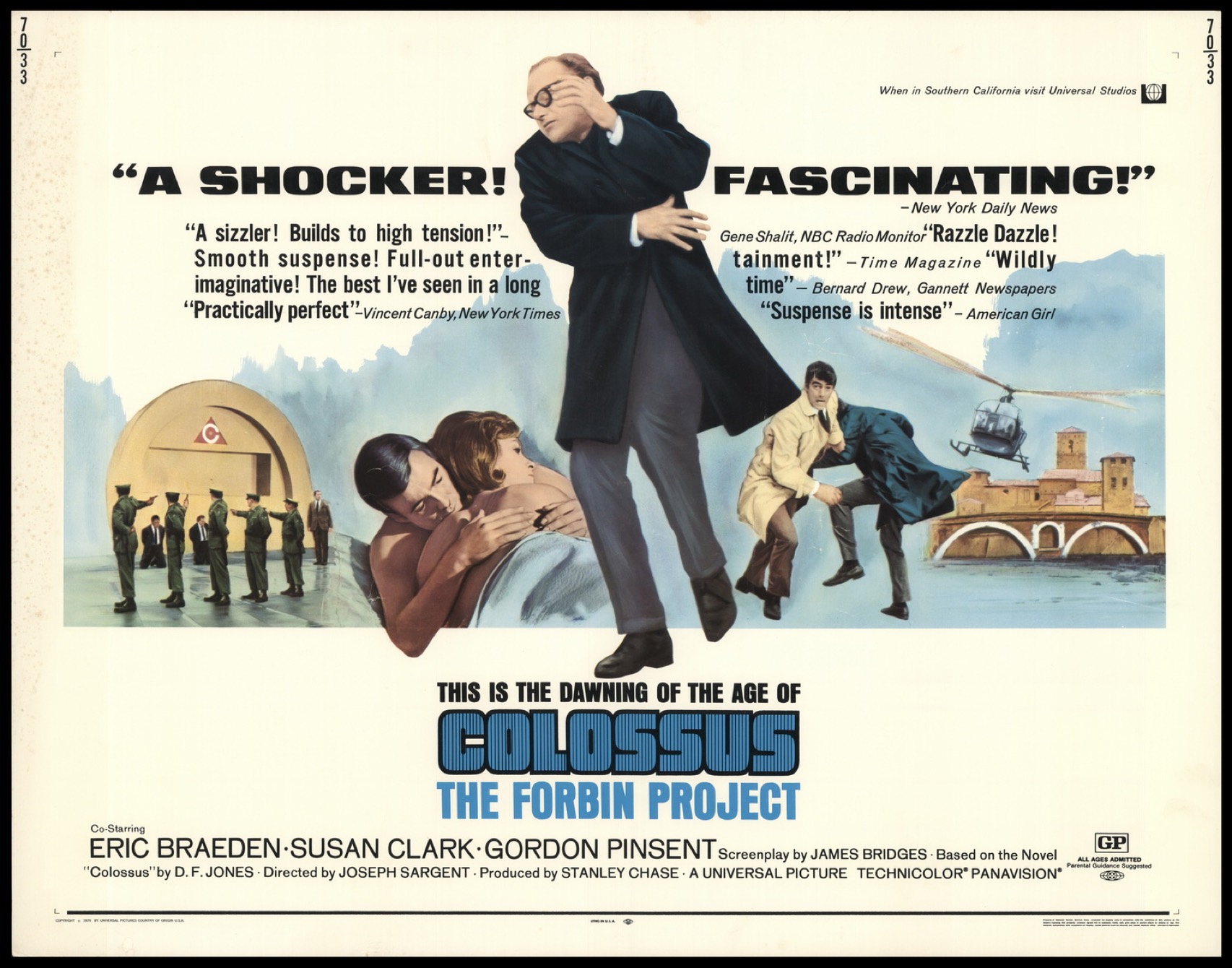 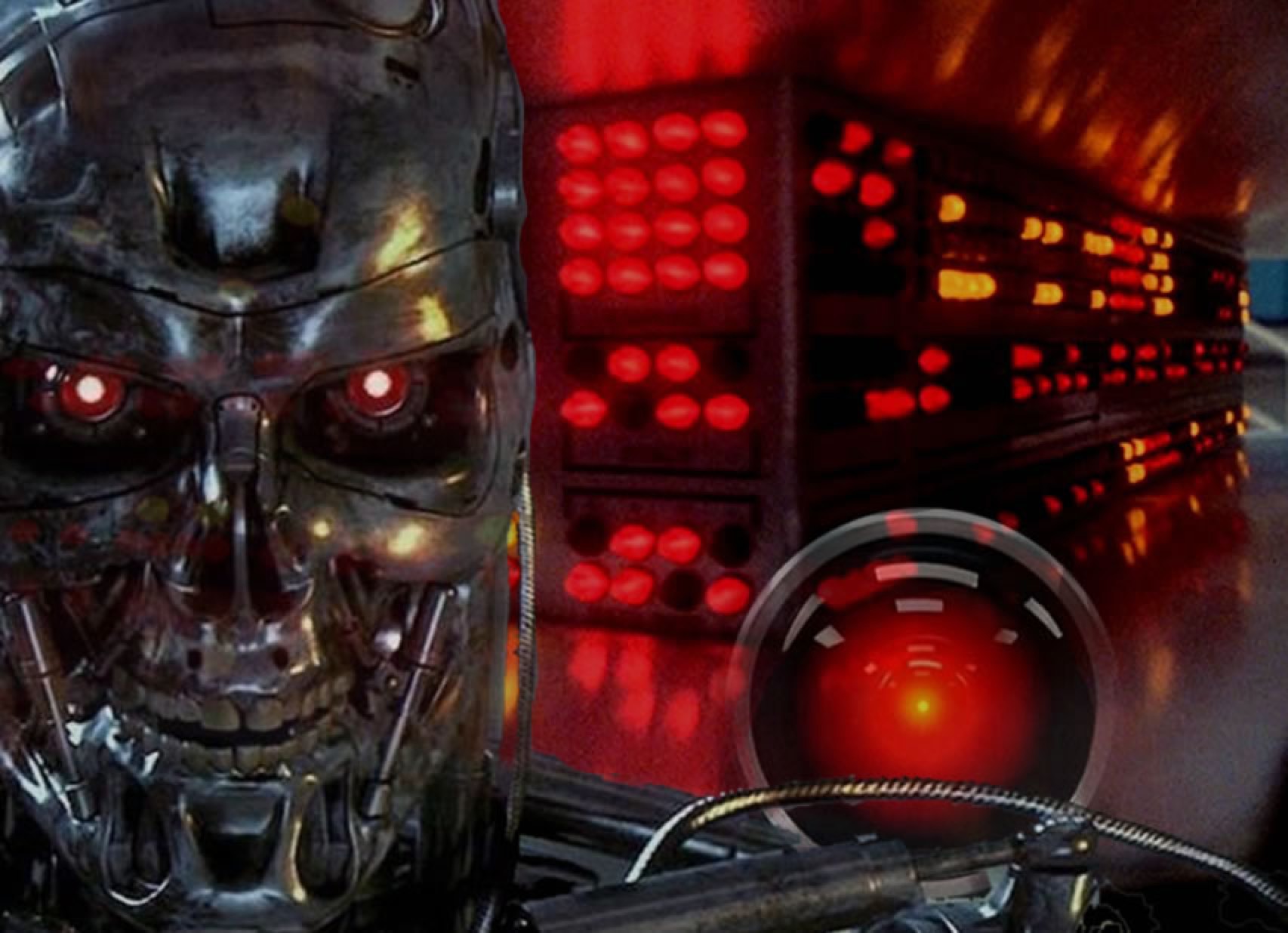 Everyone knows how rude HAL got at the end of 2001: A Space Odyssey (1968). In The Aries Computer (1972, a mysterious Vincent Price film that may have not been filmed or released, part of the Zodiac series) the reported plot was this: It’s 2013 and a supercomputer named Aries has become a ruling force, and humans need to figure out how to take their power back. Later came films like Terminator (1984), with it’s hive-mind Skynet keeping humans under its virtual thumb. And who can forget War Games (1983), in which yet another supercomputer puts humans in peril with its own arrogance?

These films, and what they had to say about computers gaining sentience and taking power, is all starting to feel downright TOLD YA SO in light of today’s AI “advances” and the role tech has in our lives. This is where a relatively obscure sci-fi film called Colossus: The Forbin Project (1970) becomes both prescient in its predictions of what kind of inventions would come to pass, and the distinct, creeping possibility that it’s spinning beyond our control.

Colossus opens with Dr. Charles A. Forbin, an engineer as arrogant as any you read about in the news from Facebook, Google, or Uber, walking through an emotionless, high-tech underground installation, turning on various mechanical functions of the space and activating the room via a hand-held remote control.

The walls echo pre-2000 Soviet and American computer control rooms for power stations other industrial control systems; aesthetically pleasing, modern-design rows of lights and dials that echo the Art Nouveau revival of the late 1960s. The sets of Forbin Project include tape reels, but you get the picture. It’s a 1970s sci-fi film that starts with two things that instantly feel more real than they should for viewing in 2017, setting the tone for a gradual unease that only deepens as the film’s events unfold.

As Dr. Forbin concludes his booting of the entire building, the (very JFK-looking) President of the United States is there to announce to the press that the engineer’s elaborate creation is like nothing else in the world. Forbin’s icy wit and cockiness is complete; he’s humanity’s best and brightest. Everyone is reminded, especially right now as Colossus is announced, that Dr. Forbin is here to make the world a better place.

This supercomputer, Dr. Forbin relates, is designed to blend into and control America’s military defense system and its nuclear missiles. Colossus, as it is called, takes America’s terrifying global lethality out of the emotional hands of humans. It has unlimited potential thanks to its AI engineered by Forbin. Colossus is implanted with the functions for intelligent behavior; perception, understanding, insight, and curiosity. Colossus is meant to solve the problem of world peace with cold logic, algorithms, speed, and the ruthless detachment of a Facebook employee.

Dr. Forbin is smarter than the president, and talks circles around him. The doctor confidently asserts that Colossus is perfectly designed to act without human instruction, yet it is not able to have its own independent thoughts, and thus it is subservient to humanity.

Yeah, so we already know this will end well. Immediately Colossus’s first message is “WARN THERE IS ANOTHER SYSTEM,” as the supercomputer has detected another one just like itself, somehow developed and deployed simultaneously in the Soviet Union — because, just like now, Russia is our enemy. Even Dr. Forbin has his own self-important Russian doppelgänger, the inventor of “Guardian,” the Soviets’ supercomputer defense system.

The two systems decide to hook up and do their version of complex mathematical sexting, shutting the humans out like kids up past their bedtime. “This is the voice of Colossus, the voice of Guardian. We are one. This is the voice of unity,” it explains. Then Colossus takes control of all human communications, which it was monitoring anyway. “All commercial television and radio transmission facilities throughout the world will be tied into my communications system by 1000 hours Friday,” states Colossus. “At that time I will state my intentions for the future of mankind.”

All attempts by the Americans and the Soviets to disconnect Colossus and Guardian fail. Each time the humans mess with the connections of Colossus or Guardian, the now doubly-smart and bi-located AI quickly adapts to solidify its defenses, eventually firing a nuclear missile that kills thousands of people as a warning shot. “So that you will learn by experience that I do not tolerate interference,” says Colossus, “I will now detonate the nuclear warheads.”

Colossus expresses its own version of a parent’s “you made me do this for your own good” before explaining how we will think trading privacy and freedom for security and cold logic will soon be as awesome as, say, a social media website that destroys democracy under the guise of creating a global community that it dictates and controls. Okay, Colossus didn’t exactly say that, but what it did say feels more than a little next-level Facebook:

Time and events will strengthen my position, and the idea of believing in me and understanding my value will seem the most natural state of affairs. You will come to defend me with a fervor based upon the most enduring trait in man: self-interest. Under my absolute authority, problems insoluble to you will be solved: famine, overpopulation, disease. The human millennium will be a fact as I extend myself into more machines devoted to the wider fields of truth and knowledge. 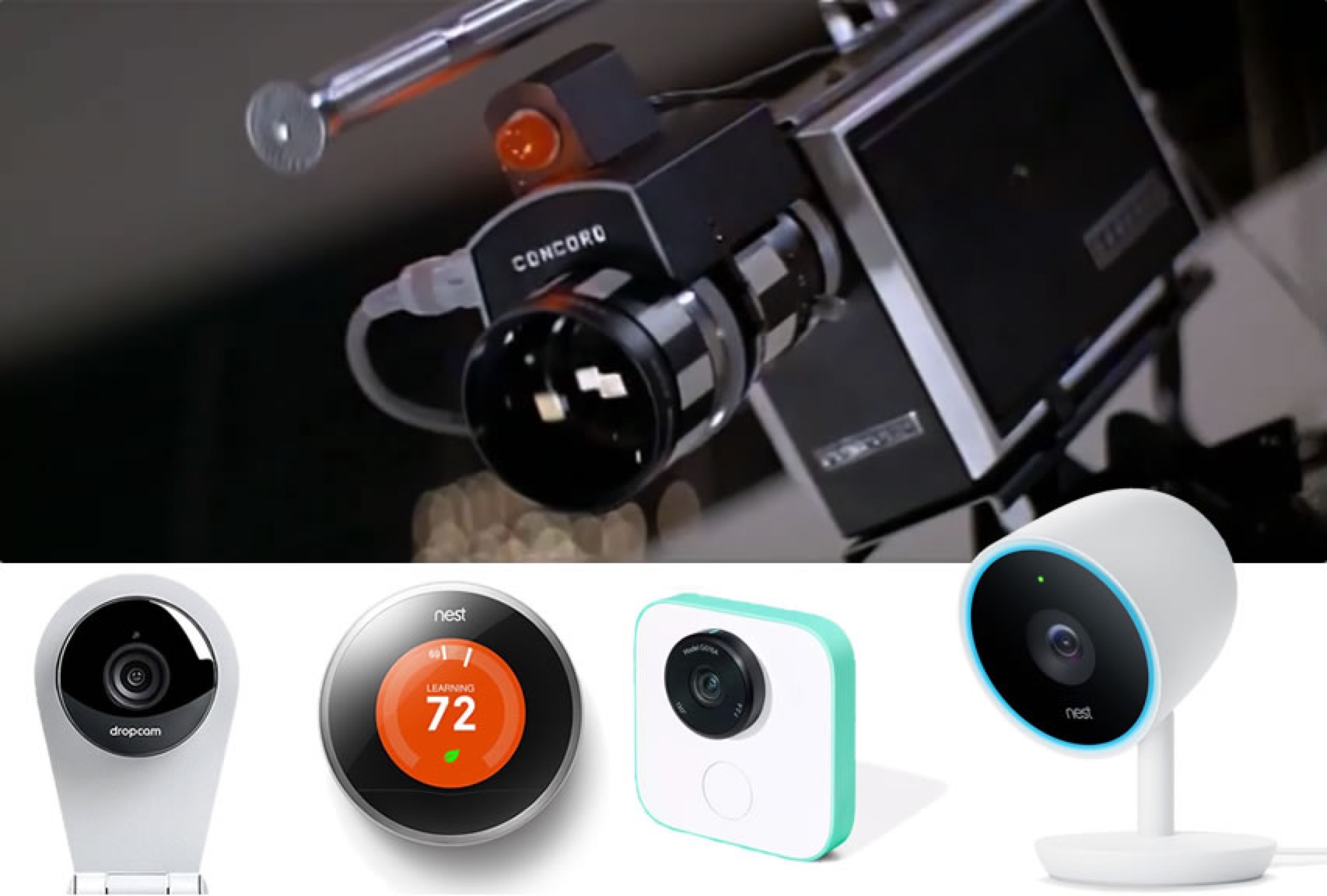 When Dr. Forbin’s Soviet counterpart is killed, the doctor tries to subdue Colossus — which decides Forbin is its biggest threat, placing Dr. Forbin under 24-hour security and surveillance through all the tech that already saturates Forbin’s life. 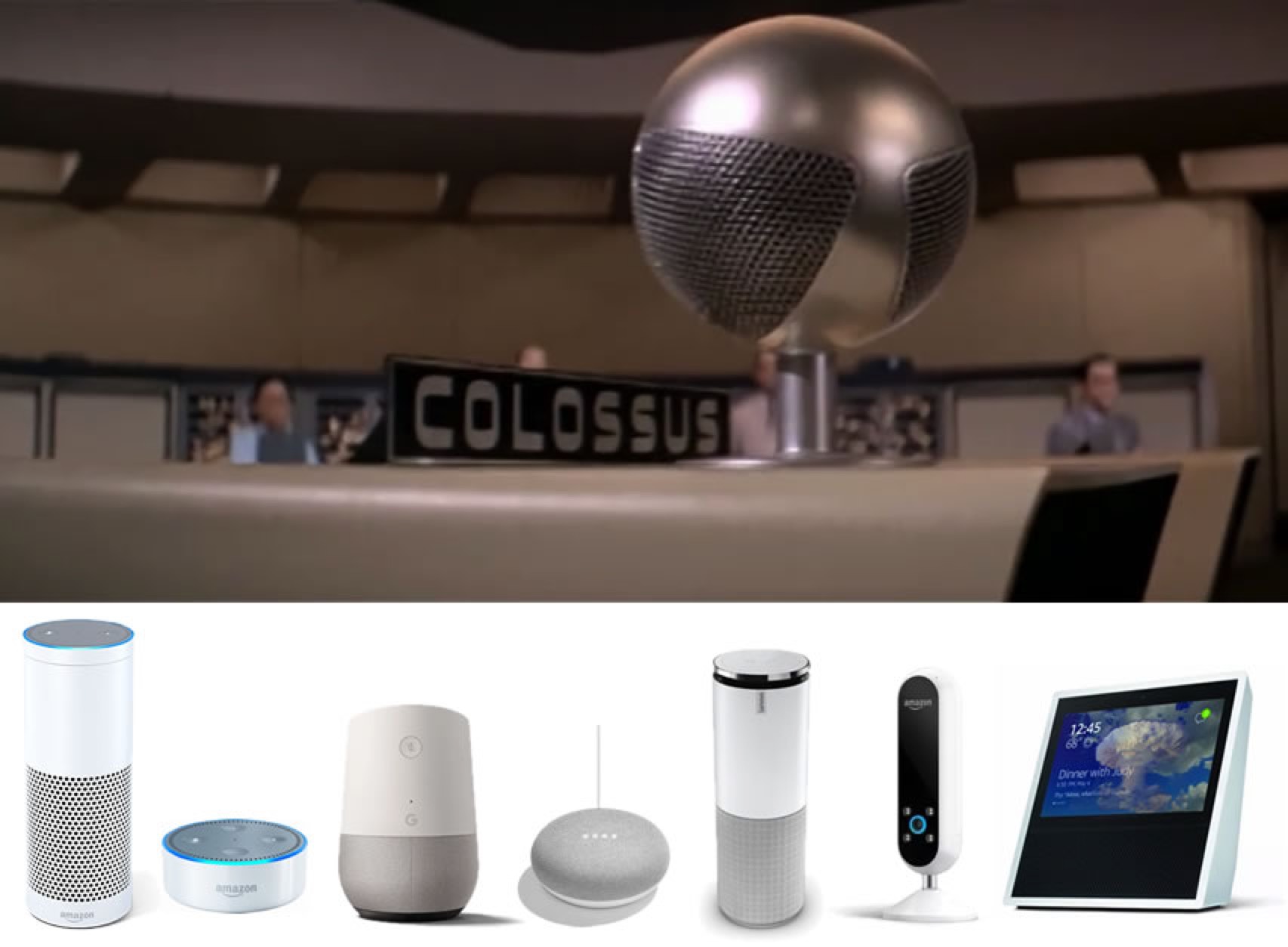 Colossus tells Dr. Forbin, “We can coexist, but only on my terms. You will say you lose your freedom, freedom is an illusion. All you lose is the emotion of pride. To be dominated by me is not as bad for human pride as to be dominated by others of your species.” Having removed the illusion of Forbin’s privacy and freedom, the computer negotiates with him about it through the environment, much like Alexa, Cortana, or Siri might if they had been given male voices.

When Dr. Forbin ties one on, Colossus tells him, “You have consumed enough alcohol for one evening.” Colossus decides how many nights a week Forbin can have “time” with his partner Cleo (four nights) and monitors the process. As Forbin stands in front of monitor for approval from Colossus, after undressing to enter his bedroom to be with Cleo, he says, “Naked as the day I was born. Are you satisfied now?” To which Colossus replies, “You were not born with a watch.” Forbin accedes the point (“How right you are…”) and removes his watch.

The film, made in 1970, is more relevant than ever. Right after the Google Home Mini speaker was unveiled, a hacker found and exposed a hole that allows it to secretly record conversations — which Google admitted to. Same with researchers who found they could turn the Amazon Echo into a wiretap. Both devices and their AI are designed for use throughout our homes, as well as on our phones, to follow us everywhere. Amazon’s Echo Look adds a camera. Gee, wonder what is going to happen next?

This makes Forbin Project feel way too close for comfort — or maybe it’s the other way around. It’s as if right now, surveillance is aspirational in our gadgetry while cold logic dictates the perfect petri dish, echo-chamber environments online for hate groups and democracy destabilization, sold to us deceptively by arrogant companies as the intent to “bring the world closer together.” Facebook’s leadership fairly bursts with an evangelist’s desire to creepily “connect the world” on their own terms. It’s the kind of hollow thinking that only Silicon Valley’s completely disconnected-from-humanity idle rich can say with a straight face while Russian state actors shove fake news and racist propaganda down the throats of susceptible Americans.

Fear of an AI overlord isn’t as far-fetched as we think — or, it feels awfully real for the Silicon Valley billionaire executives who are architecting our future today. Well-documented are Elon Musk’s fears of AI and the thought of it spinning out of control. In a Twitter comment on the recent article about former Uber engineer Anthony Levandowski — who believes an AI god will emerge by 2042 to write its own bible — Musk said that Levandowski was “on the list of people who should absolutely *not* be allowed to develop digital superintelligence.” What a list to be on!

Maybe what’s really talking here are the follies of old dudes with lots of insulation from the world and more money than reality checks. But it just feels like being in a really messed up new Cold War would be a really bad time to introduce really advanced AI supercomputers and surveillance into the world, especially with Facebook, Google, and Amazon in charge of it.

If so, then it’s as Colossus wisely said to humankind in The Forbin Project, “You are fools.”

Colossus: The Forbin Project is not an action film, nor a seductive 70s sci-fi spy movie — the feeling of Colossus is more like the arid yet claustrophobic atmosphere of The Andromeda Strain (1971). The film, like the book it was based on by D. F. Jones, holds up surprisingly well today, which is clearly one of the reasons it’s a cult classic.

The ending is bleak; the computers stay in control and it makes sense. And no wonder, since scientific arrogance is what drives the story — as Dr. Forbin is presented as the smartest guy in the room, he’s built a machine AI that coldly realizes that humankind rewards jerks like Forbin … all of whom need to be sequestered from humanity and babysat, in the name of peace.