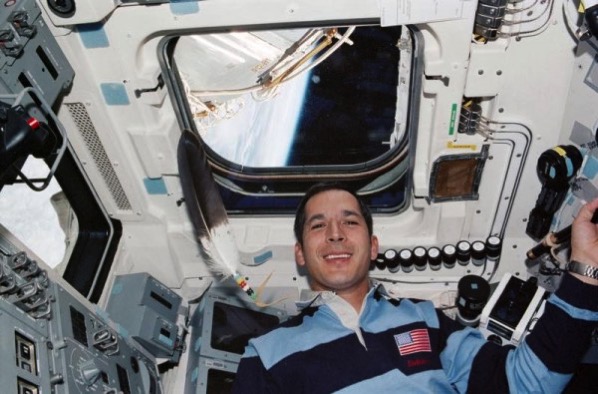 John Bennett Herrington made history as the first enrolled member of a Native American tribe to fly in space! Via Wikipedia

Herrington was born in Wetumka, Oklahoma, into the Chickasaw Nation. He grew up in Colorado Springs, Colorado, Riverton, Wyoming, and Plano, Texas, where he graduated from Plano Senior High School. He earned a bachelor’s degree in applied mathematics from the University of Colorado Colorado Springs before receiving his commission in the United States Navy in 1984.

To honor his Chickasaw heritage, Herrington, an enrolled member of the Chickasaw Nation, carried its flag on his thirteen-day trip to space. The flag had been presented to him by Chickasaw Nation Governor Bill Anoatubby.

Selected by NASA in April 1996, Herrington reported to the Lyndon B. Johnson Space Center in August 1996. He completed two years of training and evaluation, and qualified for flight assignment as a mission specialist. Herrington was assigned to the Flight Support Branch of the Astronaut Office where he served as a member of the Astronaut Support Personnel team responsible for Shuttle launch preparations and post-landing operations.